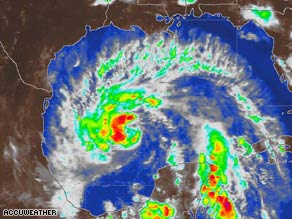 Tropical Storm Dolly was headed toward Texas and Mexico at 8:45 p.m. ET on Monday.

A flurry of warnings were issued along the coasts of Texas and Mexico overnight. The center's tracking map shows the storm coming ashore as a hurricane on Wednesday, around the Texas-Mexico border.

The storm's was moving to the west near 15 mph, but was expected to gradually turn toward the northwest by Wednesday. Dolly's forward motion was forecast to slow, giving the storm more time to intensify over the warm gulf waters. iReport.com: Are you ready for hurricane season?

Dolly is expected to produce total rain accumulations of 4 to 8 inches, with isolated amounts of 15 inches over much of south Texas and northeastern Mexico over the next few days, forecasters said.

At 5 a.m., Cristobal was speeding toward the east-northeast near 21 mph, about 485 miles (780 km) northeast of Cape Hatteras, North Carolina and about 450 miles (720 km) south-southwest of Halifax, Nova Scotia.

The storm was packing 60 mph winds, but is expected to weaken over the next 24 hours.

The Atlantic hurricane season began June 1 and runs through November.

All About National Hurricane Center • Mexico