MIAMI, Florida (CNN) -- Hurricane Bertha -- the first hurricane of the 2008 Atlantic season -- increased in strength Monday evening, according to the National Hurricane Center. 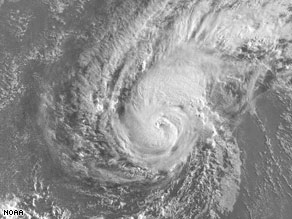 A satellite picture from 5:45 a.m. ET Monday shows Hurricane Bertha over the Atlantic.

While Bertha's power may fluctuate over the next day, it is expected to begin gradually weakening by Wednesday, the center's 11 p.m. ET advisory said.

The hurricane is expected to turn to the northwest and decrease its forward speed in the next 24 to 48 hours, the center said.

There is a very small chance Bertha will make landfall in the United States. Bermuda could be affected by the hurricane this weekend.

"It is still way too soon to determine whether or not Bertha will affect Bermuda," the center said.

The storm formed Thursday in the far eastern Atlantic, off the coast of Africa, near the southern Cape Verde Islands. It strengthened into a hurricane early Monday.

The first tropical storm of the season, Arthur, formed May 31 near the coast of Belize and dumped heavy rain on Central America and southern Mexico.

All About Hurricanes and Cyclones • Bermuda