(CNN) -- At least four people were killed and another 40 injured Wednesday when a tornado struck a Boy Scout camp in western Iowa, a state safety official said. 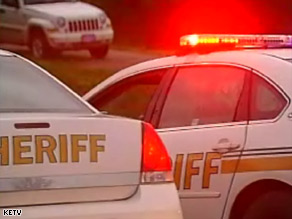 Officials arrive at the scene where a tornado hit an Iowa Boy Scout camp Wednesday night.

Iowa Public Safety Commissioner Gene Meyer said the four were killed by a storm that slammed into the Little Sioux Scout Ranch near the Nebraska state line.

Meyer said about 120 people, including 93 campers, were believed to be at the camp at the time of the storm.

About 40 people were injured, said Sheri Bauwens, a nurse with the American Red Cross.

"We had fire trucks and rescue units backed up two miles down the road away from this location," said Russ Lawrenson with the Mondamin, Iowa, Fire Department, who was on the scene shortly after the storm hit.

Lloyd Roitstein, president of the Boy Scouts of Mid-America Council, said the Scouts at the ranch were advanced Scouts between 13 and 18 years old and were there for a week of training.

He said they were staying in tents and that the site is destroyed.

The storm blew in quickly, several witnesses said. It hit shortly after a tornado watch was posted for the area.

"The grace of God helped us for sure," said Thomas White, an 18-year-old staff member at the camp. He spotted the funnel cloud and sounded the alert for the camp.

White laid in a ditch with several of the younger scouts as the tornado roared through.

The ranch, which has four cabin shelters in addition to camping space, is about 45 miles north of Omaha, Nebraska, and 45 miles south of Sioux City, Iowa.

Watch Roitstein talk about the camp search and rescue »

Bauwens, the Red Cross nurse, said many of the injuries happened when a brick fireplace in one shelter was ripped apart by the storm. The shelter was one of four where scouts had run for cover.

The National Weather Service was referring to the event as a tornado by late Wednesday. It said it received a report of a touchdown at 6:35 p.m.

Officials at Burgess Memorial Hospital, about 20 miles from the ranch, said they had treated several patients injured by the storm Wednesday night and that injuries ranged from minor to serious.

A spokesman for Mercy Medical Center in Sioux City said two children had arrived at the hospital by helicopter.

"These are traumatic injuries," said spokesman Mike Krysl, who said the regional trauma center is "in disaster mode."

The twister struck as Iowa, like other midwestern states, was dealing with severe flooding along the upper Mississippi River.

Heavy downpours hit the region over the weekend, with more thunderstorms predicted for Wednesday night and Thursday morning.

Flooding in the capital city of Des Moines and in Waterloo, Cedar Falls and other areas prompted mandatory evacuation orders and sandbagging in the state on Wednesday.

All About Iowa • Wisconsin • Natural Disasters