DENVER, Colorado (CNN) -- Early indications show no problems with the landing gear, tires or brakes on the Continental Airlines jet that veered off a runway at Denver International Airport in Colorado, despite earlier reports. 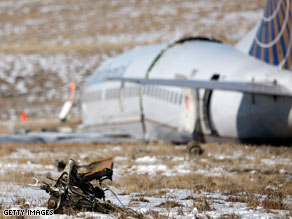 The wreckage of the Continental Airlines plane sits in a ravine December 22 in Denver, Colorado.

"There's no indication from the physical examination on the scene of brake problems at this time," said Robert Sumwalt, a National Transportation Safety Board member leading the investigation team.

Saturday's accident injured more than three dozen people, including the captain who piloted the plane.

Sumwalt said preliminary evidence indicated no problems with the Boeing 737's landing gear, tires or engines before the jet ran off the runway into a 40-foot-deep ravine during its take-off roll.

Earlier Monday, a source with knowledge of the investigation told CNN that early indications suggested that a problem with the landing gear, tire or brakes may have caused the accident.

The source said the problem could have caused a wheel to lock up or some other situation that would have made the plane veer off as it headed down the runway.

Watch what NTSB official has to say about flight recorders »

He said tire marks indicate that all four main landing gear were inflated. The weather was clear, and no obstacles were on the runway, he said.

The accident injured 38 people, most from bruises and broken bones as frightened passengers tried to flee a fire that broke out on board Flight 1404. No fatalities were reported.

Sumwalt said the captain, an 11-year veteran of Continental, was injured in the accident and "not physically able" to be interviewed yet. But an investigator interviewed the first officer, who told them that the initial take-off roll and taxi was normal. The the co-pilot "noticed a deviation from the center line of the runway and a sudden left turn," Sumwalt said.

An off-duty crew that flew the aircraft into Denver before the Saturday flight to Houston was also on board. The first officer from that crew said there was "absolutely no problem with the aircraft" during the previous flight.

Sumwalt said the cockpit voice recorder "shows nothing out of the ordinary" during the preflight operations. He said the recording revealed that 41 seconds after the brakes were released, there were sounds of bumping and rattling. Four seconds later, a crew member called for a rejected takeoff.

Passengers on Sunday described the chaos inside the plane after the plane came to rest.

"Some people were trying to get luggage from the top, the engine was on fire so I was worried, you know, about getting out of there," said Gabriel Trejos. "And then we had another guy yelling, 'Oh the plane's gonna blow up! The plane's gonna explode!' "

Another passenger, Jeb Tilly, described the experience as "incredibly violent."

Watch first responders on the scene »

Trejos, who was traveling with his wife and baby, told CNN he sensed something was wrong with the plane before it took off.

"I heard something over the intercom before, you know, that they were having engine problems and shortly after that they said that everything's fine ... there's going to be an on-time flight."

Continental spokeswoman Julie King, however, told CNN that she was unaware of any announcement of engine problems on board the flight.

Sumwalt agreed, saying, "I don't have any information, no one has come to us that they knew of a problem" before the accident.

All About Denver • Accidents and Disasters • U.S. National Transportation Safety Board