(CNN) -- Two rescued motorists were "absolutely horrified," after a wall of icy water trapped them and several others in suburban Washington on Tuesday morning. 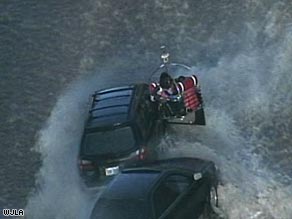 Motorists climb into a rescue basket lowered by a helicopter.

A woman trapped in a black SUV scrawled her husband's phone number on a piece of paper and flashed it to rescuers and reporters in the hopes that one of them would contact her husband.

Sarah Lee, a reporter with CNN affiliate WJLA-TV, called to assure the woman's husband that "several highly skilled swift water rescue personnel" were working to save his wife.

The woman and another passenger in the car were placed in a rescue boat, but were "absolutely horrified, gripping onto the railings in the boat for their safety," said Lee.

A massive water main break in Cabin John, Maryland, near the communities of Potomac and Bethesda, unleashed the flood during rush-hour Tuesday morning.

The water main, 66 inches in diameter, unleashed the wall of water just before 8 a.m. that, at its height, was four feet high and 60 to 70 feet wide, Montgomery County police said.

"I knew that the cars were unstable just by the amount of water that was rushing by," said Jim MacKay, a Maryland State Police civilian helicopter pilot who flew to the scene from Andrews Air Force Base.

MacKay, maneuvered his helicopter around tree limbs and power lines to hoist people to safety. The water's temperature made the situation even more dire, according to MacKay. Temperatures in the area dropped to nearly 18 degrees.

"The water had gotten into the car, so these people were at risk of hypothermia," he said. "They were soaking wet."

Several others escaped on their own.

Everyone was rescued by about 11 a.m.

Of the five people hurt, none had life-threatening injuries, but several endured harrowing moments of uncertainty.

"Water was going over my car, and I was actually scared that water will draw us away somewhere because it was very strong water," Maria Stosse told CNN affiliate WJLA.

"All of a sudden just a gush of water came along with boulders and parts of trees," a woman told reporters. "I tried to turn to get out of it [but] I couldn't. My car just got blocked in."

Dramatic rescues by firefighters and emergency crews were broadcast nationwide on live television.

A helicopter crew maneuvered a dangling metal basket to the passenger door of one vehicle where a child and one more person climbed in and were whisked to safety.

The Washington Suburban Sanitary Commission was working Tuesday afternoon to isolate the break.

A commission source told CNN that the valve at the source of the break was under water. As a result, workers were trying to turn off the water at a different point in the line.

Once the water is turned off, crews will need another four hours to repressurize the county's water system, the commission said.