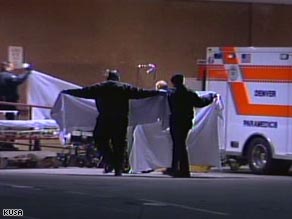 Injured passengers are taken to a hospital after Saturday's accident at Denver International Airport.

All 115 people aboard the Continental Airlines jet escaped Saturday evening, and of the dozens who were taken to hospitals, five were still hospitalized Sunday afternoon, said Robert Sumwalt, a National Transportation Safety Board member leading the investigation team. No deaths were reported.

Sumwalt said the flight data recorder and cockpit voice recorder were recovered and appeared to be in good condition, though they were covered in soot from the fire. Both recorders were sent to Washington to be reviewed as early as Sunday night.

"We are here for one reason and one reason only, to find out what happened so we can keep it from happening again," Sumwalt said.

The flight was bound for Houston, Texas, and was taking off about 6:18 p.m. Saturday when it skidded into a ravine and caught fire.

Thirty-eight people were taken to hospitals after the accident, airport officials said Sunday. Officials said one of the five people still hospitalized was in serious condition; no one was reported to be in critical condition.

Bone fractures and bruises were the most common complaint, and there appeared to be no burn victims, fire officials said.

Investigators will interview crew members, review crew training and evaluate several factors, including the weather at the time of the crash and structure of the plane, Sumwalt said.

While officials were on the scene Sunday, evidence collection, documentation and measurements will start Monday.

"We are just now beginning our investigation," Sumwalt said, adding that short, cold days will be a challenge for the investigators.

At a news conference late Saturday, Patrick Hynes, chief of the airport division of the Denver Fire Department, said crews responding to the scene "had a difficult time narrowing down exactly where the airplane ended up," but found it north of a firehouse.

When they arrived, firefighters found the Boeing 737 on fire in a ravine about 200 yards from the runway, with its wheels sheared off and fuel tanks leaking, Hynes said.

"They [firefighters] described a surreal scene when they pulled up, heavy fire on the right side of the aircraft, all chutes deployed from both sides of the aircraft, people evacuating and walking up the hillside towards them," he said.

Hynes said the entire right side of the jet was in flames and "a heck of a firefight" followed.

"There was significant extension of fire into the cabin portion," he said. "There's significant fire damage inside with the luggage compartment described as melting and dropping down into the seats."

Hynes said fuel from the aircraft leaked for several hours after the accident.

Continental issued a statement saying it was collecting information about the accident. The 115 people on board included five crew members. The airport originally said 112 people were on board, but raised that to 115 on Sunday, saying officials had not counted some children who were not ticketed.

Planes resumed takeoffs and landings at the airport after the incident, although Day said a section of the airport will remain closed into Sunday. She suggested passengers call ahead for Sunday departure times, because many flights may be delayed.

Passenger Gabriel Trejos described a scene of panic as the plane skidded off the runway while trying to take off.

"Some people were trying to get luggage from the top, [and] the engine was on fire, so I was worried about getting out of there," Trejos said Sunday. "And then we had another guy yelling, 'Oh, the plane's going to blow up! The plane's going to explode!' "