WASHINGTON (CNN) -- A company accused of encouraging hundreds to illegally enter the United States and then hiring them using fake Social Security numbers has agreed to pay the largest settlement ever in a workplace immigration bust, the Department of Justice said Friday. 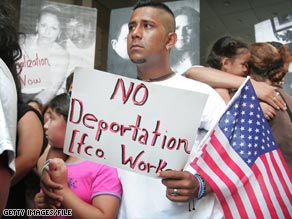 Relatives of people arrested in IFCO raids gather for a news conference in July 2006.

IFCO Systems North America, a pallet and crate company, will pay a $20.7 million settlement, which includes $18.1 million in fines and $2.6 million for overtime violations, the Department of Justice said.

To date, nine IFCO managers and employees have pleaded guilty to criminal conduct, the Justice Department said. Four managers are awaiting trial on felony charges and the investigation is continuing, it said.

The Justice Department said it will not pursue criminal charges against the company if it complies with the terms of the settlement.

"The agreement severely punishes IFCO for its serious immigration and employment violations," acting U.S. Attorney Andrew Baxter said. "But it also allows the corporation to continue its operations, so that its lawful employees and innocent shareholders do not suffer the consequences of a business failure in this economy."

IFCO records suggests that as many as 6,000 illegal immigrants worked at company plants from 2003 to 2006, the Justice Department said.

Federal officials said Friday that IFCO "acknowledges and accepts responsibility for the unlawful conduct of its managers and employees." An IFCO official could not be reached for comment.