LOS ANGELES, California (CNN) -- Legendary pinup queen Bettie Page died of pneumonia at the age of 85 in a Los Angeles, California, hospital Thursday, a week after suffering a heart attack, according to her agent. 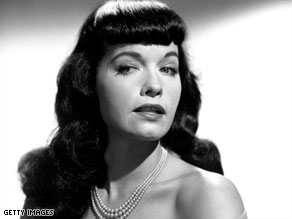 Pinup queen Bettie Page was credited with helping to usher in the sexual revolution.

"She captured the imagination of a generation of men and women with her free spirit and unabashed sensuality," said agent Mark Roesler in a written statement. "She is the embodiment of beauty."

Page, said to be one of the most photographed people of the past century, became a recluse in recent decades. Yet, her images continued to be used around the world to market Bettie Page action figures, clothing lines and other merchandise.

"Her popularity as an underground, guilty pleasures phenomenon has continued to soar despite the fact that the reclusive Page disappeared almost a half century ago, leading many to believe that one of the most photographed individuals of the 20th century was already dead." Roesler said.

Page was born to a poor family in Tennessee on April 22, 1923. While her birth certificate spelled her name "Betty," she changed the spelling later in life to "Bettie."

At a time when few women pursued a college education, Page earned a bachelor of arts degree in education from Peabody College in Tennessee in 1944, according to her official biography.

Her teaching career, however, was hampered by her looks, she said.

"I couldn't control my students, especially the boys," she is quoted as saying.

After her modeling career ended, Page returned to Peabody College to work on a master's degree, the bio said. Her Southern drawl and a refusal to sleep with a Hollywood producer hampered her acting career, according to her bio.

"I didn't like his looks," Page said. "I wouldn't have gone to bed with him anyway. He was a creep. He drove off in his big car and scolded me, 'You'll be sorry.' I wasn't."

Page said she regretted not accepting studio boss Jack Warner's offer of another screen-test, but it came while she was trying to save her marriage to her first husband, Billy Neal.

Her modeling breakthrough began after she divorced Neal in 1947 when she met a police officer whose hobby was photography. He suggested the black bangs, which became her trademark, her bio said. Not long after, her images were everywhere, gracing magazine covers and locker pin-ups.

Page wore nothing but a Santa hat in Playboy's January 1955 centerfold. Playboy founder Hugh Hefner said her appearance in his magazine's first year was a milestone.

"She became, in time, an American icon, her winning smile and effervescent personality apparent in every pose," Hefner said.

"A kinky connection was added by Irving Klaw's spanking, fetish and bondage photos, which became part of the Bettie Page mystique," Hefner said. "They were playful parodies that are now perceived as the early inspiration for Madonna's excursions into the realm of sexual perversion."

Perhaps the most memorable photos of Page were her bondage poses, which she said were all pretend.

"I never understood how anyone believed those poses were sexy," she later said. "To be tied up? I don't get it."

"She was a remarkable woman, truly someone that changed the social norms, not only here in this country, but also around the world," Roesler said. "While Jackie Robinson was changing the racial attitudes, Bettie Page was changing our attitudes on sex. She became a James Dean type of 'rebel' figure as she allowed people to be less inhibited and look at sex in a different way."

Saucy photos of Paige in skimpy clothing or none at all helped to lead the way for the sexual revolution of the 1960s.

Page suddenly disappeared from the scene in 1958. It was only decades later revealed that she re-emerged to explain that she underwent a religious conversion and moved to Florida.

Her life took a dark turn starting in 1978 after her third marriage failed, Roesler said.

Page went through "some mental instability, violent mood swings, and serious trouble with the law" and was eventually diagnosed as a paranoid schizophrenic, according to her bio.

Page reappeared in public in December 2003 for Playboy's 50th anniversary party, where she made a grand entrance with Anna Nicole Smith.

It was the only time in the past 50 years that Page allowed her photograph to be taken, Roesler said.

A private funeral service is planned for Tuesday. Page will buried at Westwood Cemetery in Los Angeles, just a few feet away from Monroe.