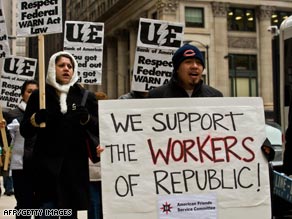 Protesters demonstrate in support of the window-factory workers in Chicago on Wednesday.

"The occupation is over," said Armando Robles, president of the United Electrical Workers local 1110, which led the sit-in.

About 200 workers launched what they called a "peaceful occupation" of the Republic Windows and Doors factory Friday after Republic gave its employees three days notice of the layoffs. According to the workers, Republic told them that Bank of America had cut off credit to the company.

Bank of America agreed Wednesday to approve $1.35 million in loans to pay those obligations. Another $400,000 came from J.P. Morgan Chase, union officials said.

Workers approved the deal at a meeting Wednesday night. Union official Carl Rosen said the average worker will receive about $6,000 under the package.

But he added: "This is about more than just money. It's about what can be achieved when workers organize and stand up for justice."

Union representative Leah Fried said this week that Republic had put the blame squarely on the bank for the layoffs.

"The company told us very clearly they are shutting down, shutting their doors because Bank of America refused to continue their credit and their financing," she said.

Illinois Gov. Rod Blagojevich ordered the state government to suspend doing business with Bank of America on Monday as the weekend protest spilled into the workweek.

After meeting with the workers on Monday, Blagojevich told reporters that "we are going to do everything possible here in Illinois to side with these workers."

His meeting with the workers came a day before he was arrested on federal corruption charges related in part to the selection of a successor to President-elect Barack Obama's former Senate seat.

All About Chicago • Labor Unions • Bank of America Corporation