WASHINGTON (CNN) -- The White House and congressional Democratic negotiators have reached a conceptual agreement on a proposed $15 billion automakers bailout package, according to senior administration officials and a Senate Democratic aide. 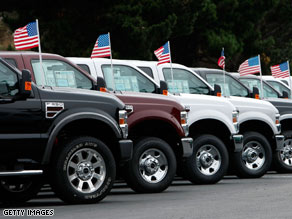 A key concern is how the bill can ensure that taxpayers are repaid for loans to Chrysler.

But both sides cautioned that there remained some sticking points to work out between negotiators, and Senate Republicans, crucial for passage, have yet to weigh in.

"I don't want to say that there are hang-ups," said a senior administration official who is close to the negotiations. "I think there is agreement in what the bill is trying to accomplish and there is discussion and exchange in terms of language.

"We feel like there's an agreement on the concept and the way forward."

One of the key remaining issues to be resolved is a Democratic provision that would block the auto companies from suing states over their greenhouse gas emission standards, senior Senate Democratic aides told CNN. But the senior administration official said it was a deal-breaker.

A second outstanding issue, the Democratic aides said, concerned how the bill can ensure that taxpayers are repaid for loans to Chrysler, a privately held company, in the event the company goes bankrupt, the aides said.

Congressional Democrats want to add language that would allow the government to reach up to Chrysler's holding company, Cerberus Capital Management, if that happens, but the White House is "pushing back," according to one Democratic aide.

"I think there will be language in the bill that purports to cover all the firms that are likely to apply and be eligible for the loans, but beyond that I'm not going to get into how it affects individual firms," the senior administration official said.

The proposed bill calls for the president to appoint a "car czar" to oversee the bridge loan process -- and aid in negotiations between all of the automakers' stakeholders to come up with a comprehensive plan to achieve viability, officials said.

The car czar would be able to authorize the manufacturers to borrow up to $15 billion from a previously approved fund for advanced vehicle technology research. Once the companies have received the loans, they have until March 31, 2009, to provide their viability plan.

The presidential designee can also authorize a one-time 30-day extension if he or she believes the parties are negotiating in good faith and are likely to finalize an agreement in that period.

The current talks have resolved two sticking points, the Democratic aides said. One dealt with a provision that any expenditure by the three companies over $25 million would have to get prior government approval. To satisfy some Republicans who considered the requirement too cumbersome, the dollar amount was raised to $100 million.

"The hammer is the loans get called," said one of the aides.

The senior administration official said the bill also contains two other "very serious sticks" to make sure the auto manufacturers "do what they're supposed to do."

The first of those, he said, calls for the so-called car czar to propose his own plan for the auto companies if they fail to do so by the deadline -- and the car czar's plan could include bankruptcy.

The second stick, the official said, was that the companies would not only have to repay their loans immediately if they fail to finalize a plan, but they would have no further access to federal funds.

But as negotiators move closer to a compromise bill, a small group of Senate Republicans are signaling they will try to slow its passage.

GOP Sen. John Ensign of Nevada said Tuesday he will filibuster the auto bailout unless there are major changes in the compromise that Democrats and the White House are close to forging.

An Ensign aide told CNN that the senator will hold a press conference at noon Wednesday with about half a dozen GOP senators who intend to support his move.

Although even GOP opponents concede that the auto bailout may likely have the 60 votes it will need to pass, these GOP senators are trying to "slow the trains down to make a point," according to the Ensign aide.

"This bailout will hurt taxpayers, it won't help the economy, and it will prevent these car companies from becoming competitive. The only way for the automakers to survive is a complete restructuring that allows them to break free from the stranglehold of union bosses," said DeMint.

Not all senators opposed to the Detroit bailout bill support a filibuster. Sen. Bob Corker, R-Tennessee, said today he thought a filibuster would be unnecessary since he believes Democrats will likely have the 60 votes to pass the auto loan anyway.

Senate Majority Leader Harry Reid, D-Nevada, has threatened to keep the Senate through the weekend to complete the bailout.

"The ball is in the Republicans' court about when we vote," said a senior Democratic leadership aide. "We hope to hear more soon about whether they will give us consent to do this quickly or insist that we run out the clock. In short, we will be in as long as it takes to complete action on this."

Senate Republicans will hold a previously planned lunch meeting Wednesday where they will have an intense discussion about the auto bailout.

Earlier Tuesday, White House spokeswoman Dana Perino said the talks had produced progress toward protecting taxpayers while allowing the automakers to do what they need to do to survive.

"Taxpayers should not be asked to finance any firm unwilling to make the difficult decisions across the scope of their businesses -- including deep and meaningful concessions from all stakeholders," she said. "We will continue to work with Congress to finalize legislation the president can support."

More talks were possible late night Tuesday after the latest draft of the bill was circulated to key lawmakers, one of the aides said.

Both the House and Senate were prepared to take up the legislation as early as Wednesday, but a decision hasn't been made about which chamber will vote first.