(CNN) -- Theological conservatives estranged from the Episcopal Church in the United States and the Anglican Church in Canada formed a rival North American "province" Wednesday. 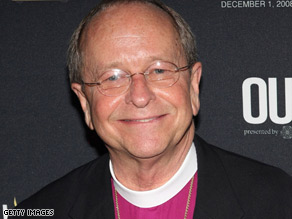 The consecration of Rev. Gene Robinson as bishop of New Hampshire left many conservatives disaffected.

Leaders of the new Anglican Church in North America unveiled a draft constitution and a set of canons for the province -- or ecclesiastical territorial division -- at an evening service at the Wheaton Evangelical Free Church in Wheaton, Illinois, the group said in a written statement.

"Some of us have been praying for this for decades," said Michael W. Howell, who attended the service, according to the statement. "Instead of focusing on things that divide us, we as orthodox Anglicans are focusing on the things that unite us."

"The public release of our draft constitution is an important concrete step toward the goal of a biblical, missionary and united Anglican Church in North America," Bishop Robert Duncan of the Pittsburgh, Pennsylvania, diocese said in a statement released Wednesday ahead of the service.

The move comes after years of debate over several issues, ranging from interpretation of the Bible to homosexuality. Tensions reached a boiling point in 2003, when the Episcopal Church consecrated an openly gay man, Rev. Gene Robinson, as bishop of New Hampshire.

The decision rankled traditionalists, and since then, four dioceses and several parishes have left the Episcopalian Church, including the diocese in Pittsburgh. The others are in Quincy, Illinois; Fort Worth, Texas; and San Joaquin, California.

Not all parishes in those dioceses have left the Episcopalian Church.

In all, the Anglican Church in North America will take in about 100,000 members, including those from the secessionist dioceses and parishes, said Robert Lundy, a spokesman for the group.

"This constitution brings them back together under one church, all aligned together," Lundy said. "This is all these folks coming back together."

The preamble to the provisional constitution says the leaders are "grieved by the current state of brokenness within the Anglican Communion prompted by those who have embraced erroneous teaching and who have rejected a repeated call to repentance," the group said.

Lundy said Wednesday the draft constitution states the province's core beliefs and doctrine. He said it will not lay out definite policies for issues the leaders disagree on, such as ordaining women.

He said it is "safe to say" Duncan will lead the nascent province. An assembly is likely to be called next year to determine additional leadership, he said.

A spokesman for the archbishop of Canterbury issued a statement noting the lengthy process of creating a province, adding that in the case of Wednesday's service, the process has not yet begun.

"There are clear guidelines set out in the Anglican Consultative Council Reports ... detailing the steps necessary for the amendments of existing provincial constitutions and the creation of new provinces," said James M. Rosenthal, canon to Archbishop Rowan Williams.

"Once begun, any of these processes will take years to complete. In relation to the recent announcement from the meeting ... the process has not yet begun."

The Rev. Dr. Charles K. Robertson, canon to the presiding bishop of the Episcopal Church, Katharine Jefferts Schori, issued a statement Wednesday ahead of the meeting, saying the church would not hazard a guess as to the consequences of the breakaway group's action.

"We will not predict what will or will not come out of this meeting, but simply continue to be clear that the Episcopal Church, along with the Anglican Church of Canada and the La Iglesia Anglicana de Mexico, comprise the official, recognized presence of the Anglican Communion in North America."

He added, "We reiterate what has been true of Anglicanism for centuries: that there is room within the Episcopal Church for people with different views, and we regret that some have felt the need to depart from the diversity of our common life in Christ."

The Episcopal Church is part of the Anglican Communion, which is composed of 38 provinces around the world. It was not immediately clear which of the other provinces would recognize the Anglican Church in North America, but Lundy said a meeting last year in Jerusalem indicated that some would do so.

All About The Anglican Communion • Episcopal Church • Gene Robinson