WASHINGTON (CNN) -- Terrorists are likely to use a weapon of mass destruction somewhere in the world in the next five years, a blue-ribbon panel assembled by Congress has concluded. 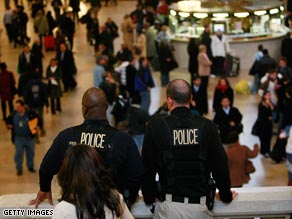 They are more likely to use a biological weapon than a nuclear one -- and the results could be devastating, the chairman of the commission told CNN.

"The consequences of a biological attack are almost beyond comprehension. It would be 9/11 times 10 or a hundred in terms of the number of people who would be killed," former Sen. Bob Graham said.

He cited the flu virus that killed millions of people in 1918 as an example.

"Today it is still in the laboratory, but if it should get out and into the hands of scientists who knew how to use it for a violent purpose, we could have multiple times the 40 million people who were killed 100 years ago," he said.

Watch how officials worry about a biological terror attack »

The U.S. government "needs to move more aggressively to limit" the spread of biological weapons, the commission said in its report.

Graham warned that such measures would be costly, but were necessary.

"The leadership of this country and the world will have to decide how much of a priority ... they place on avoiding the worst weapons in the world getting in the hands of the worst people in the world," he said.

Graham said a biological attack was more likely than a nuclear one because it would be easier to carry out.

Biological weapons "are more available," he said. "Anthrax is a natural product of dead animals. Other serious pathogens are available in equally accessible forms."

"There are so many scientists who have the skills to convert a pathogen from benign, helpful purposes into an illicit, very harmful weapon," he added.

But the commission warned that there is also a threat of nuclear terrorism, both because more countries are developing nuclear weapons and because some existing nuclear powers are expanding their arsenals.

"Terrorist organizations are intent on acquiring nuclear weapons," said the report, which was published Tuesday on the Internet and will be officially released Wednesday.

CNN obtained a copy of the report Monday evening.

It cited testimony before the commission from former Sen. Sam Nunn, who said that the "risk of a nuclear weapon being used today is growing, not receding."

The report recommends a range of measures, including increased security and awareness at biological research labs and strengthening international treaties against the spread of biological and nuclear weapons.

"Many biological pathogens and nuclear materials around the world are poorly secured -- and thus vulnerable to theft by those who would put these materials to harmful use, or would sell them on the black market to potential terrorists," the report warned.

The commission expressed particular concern about the nuclear programs of Iran and North Korea, and about Pakistan, which it described as "the intersection of nuclear weapons and terrorism."

While observing that Pakistan is a U.S. ally, the report said, "the next terrorist attack against the United States is likely to originate from within the Federally Administered Tribal Areas" in Pakistan. The tribal areas lie in northwest Pakistan where the government exerts little control; the United States says it is a haven for militants from both Pakistan and neighboring Afghanistan.

Congress created the commission to investigate and report on WMD and terrorism in line with a recommendation from the 9/11 Commission, which compiled a report on the September 11, 2001, terrorist attacks on the United States. Commissioners heard testimony from more than 250 experts from around the world over the course of their six-month investigation.