By Andy Kroll
The Michigan Daily

Editor's note: Andy Kroll is a writer for the Michigan Daily, the leading news source for the University of Michigan. This article was brought to CNN.com by UWIRE, the leading provider of student-generated content. UWIRE aims to identify and promote the brightest young content creators and deliver their work to a larger audience via professional media partners such as CNN.com. Visit UWIRE.com to learn more. 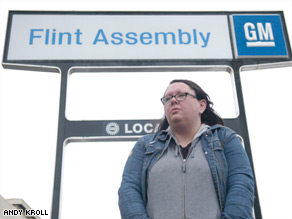 If General Motors declares bankruptcy, Amanda Emery might have to work to support her family.

ANN ARBOR, Michigan (UWIRE) -- Amanda Emery, a junior at the University of Michigan-Flint, was born and raised in a General Motors family.

Her parents both logged more than 30 years on the job for the automotive giant -- her mother, Cathy, as a skilled welder in a Flint, Michigan, truck plant and her father, Gary, as a company electrician and supervisor.

Now retired from GM, Emery's parents live off their company retirement packages, which include monthly income and health insurance for them and their children, among other benefits.

"Basically, you're talking about people that are assured that they're getting their retirement money," she said. "They've worked for it for 30 years; they're thinking their money is safe."

But with GM burning through its cash reserves and teetering on the edge of bankruptcy, the Emery family is facing the possibility that GM veterans Cathy and Gary could soon lose most of their income.

That would leave 29-year-old Emery, a journalism and photography double major, with the responsibility of helping support her family, assisting her mother to make payments for not only her own house but Amanda's grandfather's home in Kentucky and providing some form of health care for Amanda's aging parents. Her father would be able to pick up work somewhere, but her mother would not.

With executives from the Big Three automakers rebuffed in their attempt to obtain critical rescue loans from the federal government, the crisis engulfing the American auto industry has deepened, and its effects can be felt throughout Michigan as more plants shut down and workers lose their jobs.

And what about the impact on students? For them, the future looks increasingly uncertain, with parents subject to layoffs, tuition assistance and scholarship programs getting cut, and an already weakened work force set to lose even more jobs should the auto industry falter even more.

We spoke to more than a half-dozen students whose parents work for one of the Big Three who said they feared for their parents' jobs as automakers continue to trim jobs to stay afloat.

For Dmitry Vodopyanov, 21, a senior at the University of Michigan-Ann Arbor, each week that goes by holds another chance his father, a Chrysler engineer, could lose his job without any warning.

And what makes the situation even more uncertain, Vodopyanov added, is that his father relies almost entirely on the media to learn about the latest updates on Chrysler's future.

"He's always worried about it," Vodopyanov said. "And if he's stressed, then I'm stressed."

Looking to cut costs, the Big Three have thrown numerous company benefits on the chopping block this year. Among them are tuition assistance programs, which provide employees with money for continuing education classes and degrees.

Each of the Big Three has also said it will suspend dependent scholarship programs, in which dependents of employees received scholarships to help pay tuition costs.

Jerry Glasco, the director of financial services and budget at UM-Flint, said just over 200 students at the university use GM scholarships to pay for tuition.

But with GM suspending the program soon, Glasco said, students who rely on the scholarships to cover most, if not all, of their college expenses could have trouble staying in school because they can't pay their tuition.

"If that program goes away, it's certainly more difficult for those students to pursue their degrees," Glasco said.

Even students finishing up their degrees and aiming for a career in the auto industry will face their own challenges.

According to a recent report from the Center for Automotive Research in Ann Arbor, nearly 3 million auto industry-related jobs could be lost in a single year if the Big Three companies stop all operations.

Jake Obradovich, 21, a senior at Kettering University in Flint, a science and technology school where students alternate between taking classes and working full-time jobs related to their degree, said that about a year ago, he was still considering the Big Three companies as job possibilities after graduation.

"Obviously, with the way things have gone in the past six to eight months, my desire to get a job with one of the Big Three has now really decreased," he said.

Ultimately, it's the day-to-day uncertainty and mounting stress that seem to weigh most on students -- and especially those, like Amanda Emery, who come from families with lifelong connections to the American auto industry.

Her cousin recently purchased a house, Emery said. But now, with the threat that he could lose his job for good, Emery said she's concerned for him having to make payments on the new house.

"It hits me directly with, you know, my mom and my dad and my family," she said. "I worry about the future."