WASHINGTON (CNN) -- Federal authorities have received a "plausible but unsubstantiated" report that al Qaeda may have discussed targeting transit systems in or around New York, the Department of Homeland Security said. 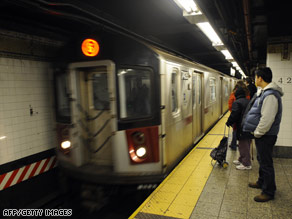 "These discussions reportedly involved the use of suicide bombers or explosives" on subway or passenger rail trains, according to a joint Homeland Security and FBI statement issued Tuesday.

"We have no specific details to confirm that this plot has developed beyond aspirational planning, but we are issuing this warning out of concern that such an attack could possibly be conducted during the forthcoming holiday season," the statement said.

The uncorroborated information indicates that al Qaeda may have discussed in late September targeting New York transit systems, Homeland Security spokeswoman Laura Keener said. She said the memo was issued as a precaution so local officials could make decisions appropriate for their areas.

Although no adjustment is being made to the national threat level, she said, transit passengers in large metropolitan areas such as New York may see increased security in the days to come. That presence might include uniformed or plainclothes security officers, federal air marshals, canine teams and security inspectors, Keener said.

"It is not uncommon for the department to receive threat information and to adjust our resources accordingly," Browne said.

The FBI received the information through a channel that has provided reliable information in the past, so the agency is taking the threat seriously, counterterrorism sources said.

The FBI and Department of Homeland Security said they had no further information on the threat.

"We are working closely with the U.S. intelligence community, state and local law enforcement and homeland security officials to vet and corroborate this reporting, and will continue to investigate every possible lead. We'll provide updates as we obtain further information," the statement said.

The public should remain vigilant and report suspicious activity to authorities, it said.

Al Qaeda has the means to launch such an attack, said CNN senior international correspondent Nic Robertson, who has covered al Qaeda extensively since before the September 11 attacks.

"The al Qaeda-affiliated groups are still willing to make these attacks," Robertson said. "What we've seen in the past is, they've become capable of making these homemade bomb devices with detonators and exploding them by cell phones or by suicide bombings."

However, he said, it also would be possible for al Qaeda to plant false information.

"They would love to sort of create fear when they're not actually capable of creating a strike. ... I've seen it myself, in Afghanistan. You get the Taliban out there on the ground, and they're very capable of knowing that the troops are listening to them, and feeding and sowing false information trails saying, 'We're over on this part of the hill' when they're nowhere near it. They're very capable and knowledgeable about feeding false information."