Family that's given 300 years to GM hopes for future

LANSING, Michigan (CNN) -- Mike Green's family is good at making things. Through four generations of putting cars together, they've built a city, created a community, and forged a legacy. 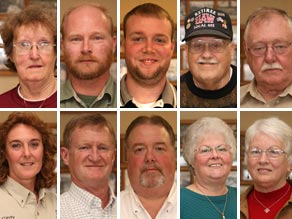 Green, 48, is president of United Auto Workers Local 652 in Lansing, Michigan, where General Motors has been building cars for more than 100 years, first under the Oldsmobile name and later expanding to include Cadillac, Buick and Pontiac models.

Following his grandfather, both parents, two uncles, an aunt and his sister into the Lansing factory complex, Green knew from the start that he would be held to high standards on the assembly line.

"When you went in there you not only were a part of something, building something and putting it together, but as a family coming from there you didn't want to let anybody down," Green said.

The Greens' GM dynasty is in jeopardy if General Motors doesn't survive the current crisis that has U.S. automakers asking Congress for financial help.

That dynasty includes 10 family members -- all current or former autoworkers -- who gathered around a table at the Local 652 hall in west Lansing recently. Together they have close to 300 years of service with GM.

Watch the Green family say what future they see for GM »

Green's uncle Bob Evans, 73, started at Oldsmobile in 1961, having served 10 years in the Army's 11th Airborne Division in Germany, Lebanon and the early days of U.S. involvement in Vietnam. Evans, a skilled tradesman, met his future wife, Pat, working in a plastics department.

"From the beginning, it's been quite evident that what General Motors has done for my family and for the rest of us is put food on the table and [provide] a steady job," Evans said as sentiment clutched his voice.

That steady job has been no small thing, Green's sister Cindy DeLau, 49, added.

"Along with the good standard of living, we've had health care, we went through braces," she said, casting a sidelong smirk at her brother, "all the good things that having a decent-paying job brings to a family."

The family and others like it weren't just working for themselves, though.

"There was a lot of pride in what we did in General Motors through the years," said Mike Green's father, Marine Corps veteran Richard Green, 73. "My father [Kenneth Green] hired in in '45; he was part of the great group that won the Second World War. When I hired in, the Korean War was in full bloom. We built jet engines here to help the war effort. ...

"We were one of the spokes that helped win the Second World War, the Korean War and the Cold War with what we manufactured at General Motors. We've done more through the generations than just build cars."

At the other end of the family spectrum is Mike Green's son Rollin Green, 23, who came to work for General Motors full time in June of this year. Because of concessions the UAW has made to help GM stay afloat and preserve jobs, he's paid at half the rate of the older generation.

Still, he's confident about the future of GM and Local 652.

"I would like to think we could sit back and weather the storm and hopefully come out of this stronger than we went into it," he said, adding that it won't be easy.

"You develop all these relationships in the plant. You spend so much time with these people, they're like family," Mike Green said. "You form bonds that are lifelong."

"It's people you've grown up with," DeLau agreed. "I've got 31 years in, and there are people I hired in with, and I'm still with them. I know their kids, their grandkids. It's a huge family."

Their cousin Ed Sawyer, 48, a GM carpenter, recalled having to leave work in a hurry when his daughter's birth came early.

"When I came back the next day, I had about six pink sacks sitting on the bench," he remembered with a wide smile. "There were afghans and clothes. You know, we are a big family."

See where else GM has plants »

Stereotypes of autoworkers as lazy or sloppy irk DeLau.

"I would invite [critics] in to an assembly plant to see the hard work that goes in. I have never once seen a car put itself together. ... It is very physical, hard work," she said.

"That goes way back; it's up through the generations," Mike Green said. "What it means to me is I'm a part of something where people stick together through the good, through the bad. ...

"We've talked about family sitting around this table, both your blood relatives and your extended family in the plant. And that's what the UAW brings to you: It teaches you how to stick together through thick and thin. And that's what you've seen through the generations."