(CNN) -- Senate Majority Leader Harry Reid reversed plans Wednesday to hold a test vote on an automakers' bailout bill on Thursday. Reid had planned to move on legislation that would have taken $25 billion from the $700 billion already approved for Wall Street and diverted it to the big three automakers. 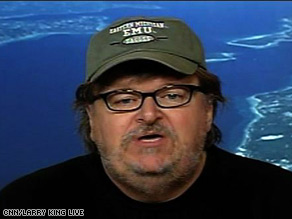 Filmmaker Michael Moore says the collapse of General Motors could mean the loss of millions of jobs.

In 1989, Moore became an international figure for his film, "Roger and Me," which centered on the declining auto industry in his hometown of Flint, Michigan and the ripple effect on the town's residents.

Today, I think there's less than 12,000 working in the area, so it has devastated Flint. Flint was one of the first towns to go. When I made that movie almost 20 years ago, I hoped that the film would be a warning to other cities that this corporation was intent upon removing jobs from this country and taking them to Mexico and Brazil and other places.

When I made that movie that year, General Motors made a profit of over $4 billion, and they were still laying off people simply to make a bit more money, the people who helped to build the company, the workers in their hometown of Flint, Michigan, they just forgot about them and took the money and ran.

King: Since the principle was, 'We'll have the cars built elsewhere and many of the cars are built elsewhere now,' what went wrong if they were paying less out of the country to build them?

Moore: Well, what really went wrong is that General Motors has had this philosophy from the beginning that what's good for General Motors is good for the country. So, their attitude was we'll build it and you buy it. We'll tell you what to buy. You just buy it.

Eventually, the consumer got smart and said, 'You know what, I'd like a car that gets a little better gas mileage. I'd like a car that's safer on the road,' so they started to buy other cars. General Motors still wouldn't change. They still kept building the wrong cars, and more and more people stopped buying them.

At a certain point, you know, General Motors lost such a large part of the market share that there probably was a point of no return.

Now, here we are on the verge of this collapse. If General Motors collapses, then there goes hundreds of thousands of jobs, if not millions of jobs of the ripple effect of this.

King: And the same is true of Ford and Chrysler?

Moore: Absolutely. I'll tell you, it was hilarious just watching these CEOs there (Tuesday) and (Wednesday) testifying in Congress, saying that, you know, that the problem wasn't theirs, you know, the cars they were building. It was the financial situation that we're in now.

The problem is the cars they've been building. They've never listened to the consumers. They've just gone about it their own wrong way. I'll tell you, you know, I'm of mixed mind about this bailout, Larry, because I don't think these companies, with these management people, should be given a dime, because that's just going to be money going up in smoke or off to other countries.

GM is currently building a $300 million factory in Russia right now to build SUVs, right outside of St. Petersburg. That's where your money's going to go, no matter what they say.

King: Why (do you have) mixed feelings?

Moore: Well, because we can't let all these people lose their jobs because of the bad decisions, the stupid decisions made by the management of these auto companies. I think what has to happen here is that Congress needs to pass some legislation, and our president-elect needs to do what Roosevelt did.

King: What do you want them to do now?

Moore: President-Elect Obama has to say to them, yes, we're going to use this money to save these jobs, but we're not going to build these gas-guzzling, unsafe vehicles any longer.

We're facing a national crisis, not just an economic crisis, but a crisis of the polar ice caps are melting. There's only so much oil left under the Earth. We're going to run out of that, if not in our children's time, our grandchildren's time.

There's got to be a plan set out to find other ways to transport ourselves in other ways than using fossil fuels.