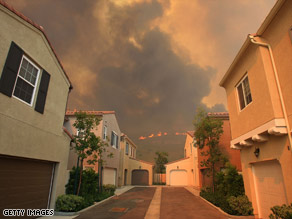 Fire draws near homes in the Los Angeles-area community of Porter Ranch, California, on Monday.

"We are concerned about what will happen tonight when the winds pick up," Los Angeles Fire Chief Douglas Barry said Monday.

California Gov. Arnold Schwarzenegger Monday declared a state of emergency Monday in Los Angeles and Ventura counties because of the fires.

Democratic Rep. Brad Sherman, whose district covers the area where the fire is burning, called on President Bush to issue a federal disaster declaration for the area.

At least two people have died because of the blazes, which have burned 8,000 acres in the hills and mountains of Los Angeles and Ventura counties, fire and police officials said.

One was identified as a man who died in a makeshift wood-and-cardboard shelter and appeared to be homeless. A dog's body also was found.

The other victim was killed in a collision of motorists who were trying to exit a freeway that was closed because of one of the wildfires, a fire official said.

No identity or age was available for either victim.

"Winds are causing fire conditions to change by the hour," Schwarzenegger said in a statement released Monday. "Several thousand acres have already burned with minimal containment and more acres are threatened." iReport.com: Are wildfires affecting you?

Residents downwind were warned to remain alert into the night. "It can go from here to the ocean in a matter of two to three hours," said Los Angeles County Supervisor Zev Yaroslavsky, The Associated Press reported.

Barry said investigators have not determined a cause for either blaze.

Fire officials warned that strong winds, predicted to reach more than 60 mph after 11 p.m., could send fire roaring south down the Pacific coast near Highway 101.

Officials have shut two freeways north of Los Angeles and authorities dispatched water-dropping helicopters and more than 200 fire engines as the blaze "started to push toward the city," said John Tripp of the Los Angeles County Fire Department.

About 350 police officers are on the scene, patrolling evacuated neighborhoods and warning residents ahead of the flames.

Officials shut down part of Interstate 210, also known as the Foothill Freeway, and any residents north of the freeway were under a mandatory evacuation order. The fire jumped the interstate in one spot and headed toward the Lake View Terrace area.

A portion of State Route 118, known as the Ronald Reagan Freeway, also was closed.

The larger of the two fires has charred more than 3,500 acres in the Angeles National Forest, officials said.

The other fire, burning nearby, is expected to expand as the winds push the flames away from the center.

In San Diego County, a wildfire that began on an explosives training range at Camp Pendleton had grown to more than 1,500 acres by nightfall and forced the evacuation of 1,400 homes, The AP reported.

In northern California, a wildfire that started Sunday on Angel Island in San Francisco Bay had spread across 250 acres as of Monday morning but hadn't damaged any buildings in the historic state park, a Marin County fire official said.