Economists: Cycles will happen, but governments must act 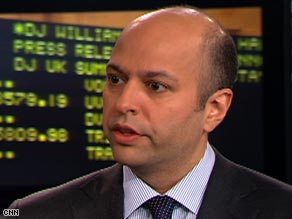 While Achuthan said some aspects of the current crisis are part of a natural cycle and must be endured, he and Sachs said governments can do things to limit the damage and initiate recovery.

American Morning: Is there any one thing or group of things happening right now to cause this crisis?

Achuthan: To keep it simple, there's two pieces to this. There's a credit crisis, which we've all known about and been talking about, and that's been combined with a global recession. And global recessions, these happen over time. We've had a couple since World War II. It looks like this global recession is roughly on par with the one we had in the mid-'70s.

In the mid-'70s, we also had a bear market that didn't happen overnight, it happened over time. We lost 45-48 percent of the value of equities. We're down about 40 percent now, so it's somewhat similar.

And that part of it you can't do anything about. That's just happening. The credit part you can maybe do something about.

AM: Is there a consensus about how we got here?

Achuthan: There hasn't been an understanding about how we got here. There was this housing and credit problem, and then the recession is approaching, and a lot of time was wasted as opposed to acting quicker. ... The whole issue is time. The markets don't wait for these debates [over policy]. They will move right away. You have to also be having policy move quite quickly. These are huge things that are being done right now.

The other half is the global recession and, unfortunately, the business cycle dwarfs governments. You can't do anything about that. That part we're all along for the ride on.

AM: We're seeing consumer spending pull back. Do we need another multibillion-dollar stimulus check to go out to people?

Achuthan: It may do something on generating a recovery next year. The immediate issue at hand is unsticking the credit markets, and I think the government -- the major governments, not even the G-7 but the G-20, even bringing in some of the bigger emerging markets as well -- all need to get together and say they are getting behind the credit markets.

I suspect that will come out of the meetings that they are having right now. If they don't, then there's trouble in the credit markets.

On the business cycle, on where is the consumer is headed, on where jobs are headed, we're going to have to ride this out because the train has left the station. There is nothing you can do about that. We're along for the ride.

That is the bad news. The good news is that the business cycle always turns. Out of all this destruction, there will be new opportunities. And there will be pent-up demand. When you add that with all of this liquidity that has been put in here, we will have a recovery.

Another [stimulus] package may reinforce that recovery, and in that sense it may be a worthwhile idea ... to make sure that somewhere in '09 there's an upturn that sticks.

AM: The International Monetary Fund is holding a meeting to try to figure out the roots of this crisis and whether or not there's a global solution.

Sachs: I hope they come up with some mechanisms for better policy coordination and especially helping Asia not to spiral downward as the United States goes into recession, because if Asia can keep growing, that can also help Europe and the United States. We need to get some balance in the world economy so that not all major parts of the economy are going down simultaneously.

AM: How do you stop that cyclical spiral downward in Asian markets?

China is urbanizing at an unbelievable rate, and if they spend a bit more with those $2 trillion of reserves that they have, they could bolster their economy more than just sitting there and saying, "Oh my god, look at what's happening in the U.S."

AM: In an earlier interview, you seemed to think the $700 billion bailout plan was already obsolete. Rather than buying up these stocks and securities, should the federal government take that money and use it to recapitalize the banks?

Sachs: They are going to have to go in that direction.

We're truly going to have to wait for the next government, because while they can do certain things right now to [limit the fall], we need a government that functions and that has popular support and that has medium-term perspective, and that's waiting for our elections and for January 20.

AM: How did this happen, and where do we go from here?

What is true, however, like Franklin Roosevelt so famously said, sometimes what you really have to fear is fear itself. That's what we have right now. We need political leadership to put a floor under this because we don't have to go into collapse. We will go into a downturn, but we don't need a collapse, and leadership can help stop us from going into collapse.

AM: FDR also said he was going to fix the crisis in 1932 by bold, persistent experimentation. Do we need that?

Sachs: We're going to need a different kind of economic philosophy from the one that we've had for many, many years. The idea of no government and deregulation, that is passe. We're going to need an active government that's addressing core challenges of energy, of infrastructure, of health, that's addressing these financial problems as well. It's a new economic age, it's a new economic philosophy. The old one is out the door.