WASHINGTON (CNN) -- The U.S. Army is establishing a suicide prevention board to examine the mental health of its recruiters around the country after the fourth suicide in three years by Houston, Texas-based recruiters, according to Army officials. 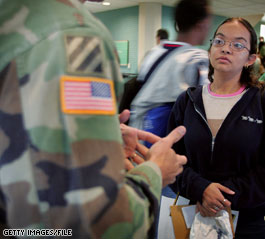 The Army Recruiting Command is examining recruiters all over the country for job-related and combat-related stress.

The board will look at how to handle the high-stress climate facing recruiters who may be both under pressure from their job and victims of post-combat deployment stress, according to Douglas Smith, a spokesman from the U.S. Army Recruiting command.

The Army's examination comes after a sergeant first class, a member of the Houston Recruiting Battalion and an Iraq combat veteran, killed himself at his home earlier this month.

CNN has chosen not to name any of the recruiters.

The sergeant's was the second suicide within the ranks of the battalion within weeks, Army officials said. In August, a staff sergeant, a combat veteran in the wars in Afghanistan and Iraq, also killed himself.

Another Houston recruiter killed himself in 2007 and a yet another in 2005, Army records show.

The Army Recruiting Command is sending a team -- including a chaplain and a psychologist -- to assist the Houston recruiters. The team was scheduled to show up in mid-September, but because of the severe hurricane damage the arrival was delayed until October, officials said.

A chaplain from Army Recruiting Command in Fort Knox, Kentucky, was sent to be with the battalion shortly after the latest victim's death, Smith said.

The members of the Houston battalion received their last training in December 2007, according to an Army statement.

The Army Recruiting Command is examining recruiters all over the country for both job-related and combat-related stress problems, but is giving special attention to the Houston battalion at the moment, according to Smith.

"We do not have any other circumstances with our recruiters around the country like we do with the Houston unit," he said.

The deaths of the two recruiters this year also caught the eye of U.S. Sen. John Cornyn from Texas.

Cornyn wrote a letter to Army Secretary Pete Geren this month about the suicide rate in the battalion.

"Due to the recurring deployments that have proven necessary to sustain operations in the Middle East, it is likely that a large majority of our recruiters are also veterans of the wars in Iraq and Afghanistan," he wrote.

"Many of our military recruiters work in recruiting offices and facilities remote from the military installations at which their fellow soldiers serve. As such, many of them lack the same access to peer support networks and important services for dealing with stress, anxiety, PTSD and other conditions that may directly result from their prior combat service," he said.

A veteran's advocacy group says Houston has one of the top recruiting operations in the United States but there is a good deal of stress in bringing in new recruits when the Army is stretched.

"The suicides in the Houston battalion are a very loud, very bright alarm that Army officials and politicians can't afford to ignore," said Paul Sullivan, executive director of Veterans for Common Sense.

While recruiting among all of the services has been on target for more than a year, the stress levels on recruiters to bring in new service members can be crushing with extended hours and, many times, six- or seven-day work weeks.

Army officials said Cornyn was correct in saying one of the problems for recruiters is they work in locations often far from bases where they can get the mental health help that is readily available to other troops.

With the United States at war for the past seven years, the vast majority of recruiters have combat experience, Smith said.

Last year there were 115 active duty suicides, the highest for the Army since the Vietnam War, according to Army statistics.