(CNN) -- Cycling superstar Lance Armstrong stunned the sports world September 9 when he announced that he would come out of a three-year retirement to attempt to win the Tour de France for a record eighth time. 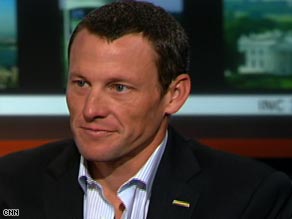 Lance Armstrong said taking the message about cancer worldwide means erasing the stigma behind it.

The 37-year-old Texan said he was returning to raise awareness of cancer, having survived testicular cancer to triumph in cycling's most famous race.

Armstrong spoke Wednesday with "American Morning's" Kiran Chetry about what lies ahead in his return from retirement and the message he hopes the world will embrace.

Kiran Chetry: A lot of excitement around the fact you that are returning to cycling. Are you going to race in the Tour de France?

Lance Armstrong: That's the plan. Certainly that's the marquee event in cycling, the one that draws the most attention and eyeballs. And with the campaign to take Livestrong global, you want to do the most high-profile event and reach out to the places that need the message the most -- France being one, Australia another, South America, South Africa, Asia -- a lot of places where the global epidemic for cancer is still prevalent.

Chetry: You were diagnosed and given a 40 percent chance of survival when you were in your mid-20s, and for you, this has become a passion perhaps even greater than cycling. Is that the reason you are returning to the sport?

Armstrong: It's the first reason. I guess if I looked at it from an athletic standpoint, I don't really need to win another Tour. Seven Tours for me was a dream, six broke the record, so that eight doesn't really mean much.

Watch Armstrong talk about his decision to return to cycling »

Chetry: You can't go anywhere without seeing someone wearing your bracelet. That's led to $70 million from the bracelets alone. Why did that message seem to resonate with so many people?

Armstrong: It's very simple. It resonates because the disease affects everybody. Not that everybody has been diagnosed themselves, but everybody has a family member or a neighbor or a classmate that dealt with this disease. So it is literally 100 percent the basis. Everybody understands that everybody wants to ultimately see this disease go away in our lifetime.

Chetry: Getting back to cycling, one of your former teammates, Robbie Ventura, was talking about how difficult it is. He said the hardest part will be going back to the mental discipline of training -- eating, sleeping with 110 percent commitment and snapping your brain back to the being perfect all the time. Is it the mental part that is harder than the physical part?

Armstrong: The mind has snapped back. Mentally, I feel 25 again. I feel motivated and more inspired than I've ever been to get back to the bike and work hard to make all the sacrifice it required to be competitive.

Physically, at 37, I'll be almost 38 when I start the tour next summer. That's slightly different, but ultimately, I believe that the mind powers the body, and once the mind says we want to do it, then the body will follow.

Chetry: On a practical level, what is that type of training like? What do you do every day?

Chetry: I want to ask you about presidential politics right now. I know you met with and talked and I saw you touring with John McCain, and he's a cancer survivor himself. What does the president need to be aware of? What type of action would you like to see happen when either one of these men makes it to the White House as it relates to cancer research?

We need more funding at the federal level both at the National Cancer Institute and the National Institutes of Health. Both candidates have pledged to increase funding. Barack Obama has pledged to double funding at the NCI. I think we should do more about regulating and controlling tobacco abuse in this country, especially when it comes to the youth of America. There are a lot of steps here

But I think you have both candidates that are engaged. One is a survivor himself; the other, Barack Obama, having lost his mother to this disease. They will enter the White House with this as a priority, I think.

All About Lance Armstrong • Cancer • Cycling