LOS ANGELES, California (CNN) -- Friday's two-train collision killed 25 people and injured more than 130 others near Los Angeles after an engineer failed to heed a traffic signal, a spokeswoman for Metrolink commuter trains said. 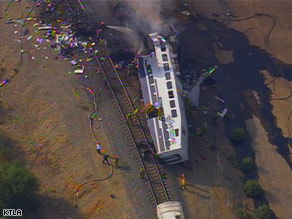 A commuter rail car lies on its side after a collision Friday near Los Angeles, California.

The engineer was guiding the Metrolink train that slammed head-on into a freight train and is not believed to have survived, Metrolink spokeswoman Denise Tyrrell said on Saturday.

"It was human error," Tyrrell said, adding this was Metrolink's belief "barring any new information" from an investigation by the National Transportation Safety Board.

NTSB spokeswoman Kitty Higgins said the agency would "look at everything before we rule anything in or out."

Tyrrell said the engineer, whom she didn't identify, was a subcontractor employed by another company. She said she did not have details of his record.

The crash occurred about 4:30 p.m. PT Friday in Chatsworth, a northwest Los Angeles suburb. The Metrolink train had about 220 passengers and two crew members on board at the time, according to Tyrrell.

Forty-five of the injured were in critical condition, with 40 flown to hospitals, Tyrrell said. Another 50 had minor injuries, and 40 others were treated at the crash site but transported to hospitals for evaluation.

"It was like running into a brick wall at 60 miles an hour," an injured passenger told CNN affiliate KABC.

In the minutes after the crash, passers-by joined emergency personnel in an effort to free passengers from the wreckage.

On Saturday afternoon, Los Angeles Mayor Antonio Villaraigosa said the search of the wreckage had finished. Earlier in the day, authorities were picking through the wreckage and freeing trapped bodies.

Ed Winter, assistant chief of the Los Angeles County coroner's office, told reporters two bodies -- both of females -- had yet to be identified. If the females had carried identification, it probably was lost in the crash, he said.

As of 9 a.m. PT Saturday, authorities had been able to notify relatives of eight victims, he said.

Gov. Arnold Schwarzenegger visited the crash site on Saturday, telling reporters it was "one of the worst train accidents in modern history in California."

The NTSB will make a final determination of the crash's cause. Higgins, the agency's spokeswoman, said data recorders have been recovered from both trains, along with a video recorder from the freight train.

Tyrrell said a review of "a number of programs," including the signal system, showed the commuter train's engineer failed to heed a stop signal, Tyrrell said.

"We don't know how the error happened, but this is what we believe happened," Tyrrell said.

The wreck occurred on a curved part of the track where the speed limit is 40 mph, Tyrrell said.

She said that just like road vehicles, trains are subject to signal systems. At the wreck site is a siding where one train can wait while another passes, she said.

"They receive a signal to stop and they must hold their location until other traffic has passed," she said.

Villaraigosa praised police officers and firefighters for working under emotionally draining conditions and treating the victims with respect.

"This has been a grueling night for them," he said.

The crash sparked a fire that impeded firefighters's efforts to reach the front commuter car, where most of the injuries occurred, Los Angeles County sheriff's spokesman Steve Whitmore said.

The fire eventually was brought under control.

Among those killed was Spree Desha, 35, a Los Angeles police officer on her way home from work, officials said Saturday.

"It's not unusual for us to respond to disasters," said Jerry Szymanski, an assistant commander for the LAPD. "When we got here, we found it was one that hit close to home."

Desha had "mentored and trained a lot of the young officers in the North Hollywood area," Szymanski said.