WASHINGTON (CNN) -- For years, retired Air Force Col. John Leech has had no desire to return to the Pentagon. 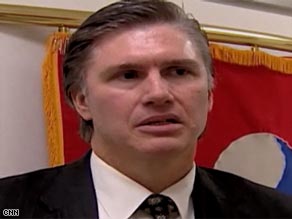 He will attend Thursday's dedication of the Pentagon memorial honoring the 184 people killed in the terror attack.

In an earlier visit to the memorial, Leech left a note for his friend Navy Capt. Jack Punches: "Thanks Jack for serving and dying for our nation."

Leech could barely contain his sadness recently as he watched a Department of Defense videotape showing the burned interior of the area in the building where he was that fateful morning.

"Wow. My God. ... It makes you weak in the knees to see these pictures," Leech said.

Leech, 54, recently took CNN into an office not far from the conference room where he was that morning. He has avoided touring the building since the attack but finally decided he was ready to "re-engage" with the past.

In 2001, Leech was working as a Defense Department liaison officer to the White House Drug Policy office. He worked primarily out of the White House but attended meetings at the Pentagon every Tuesday and Thursday morning.

Watch as he returns to the crash site »

As he walked the now-renovated halls where he spent the morning of September 11, he recalled the horror of the day.

The shock, he said, was indescribable.

"It hit with such force. I had never experienced anything like it in my life. It rattled you right down to the bone," Leech said.

Flight 77 slammed into the west wall of the Pentagon at 9:37 a.m. ET. Among the 184 people killed in the building and on the plane were a 3-year-old girl and a 71-year-old retired Navy captain, the youngest and oldest victims, who were both passengers on Flight 77.

A closer look at the new Pentagon memorial »

Several people were killed or severely burned not far from where Leech took cover. He remembers people screaming, "bloodcurdling screams."

"I was so lucky. ... It was almost like we were in a protective cocoon," Leech recalled. "I mean, I inhaled a lot of jet fuel vapors, and I got dusted up, but that was the extent of my injuries."

The married father of a 26-year-old woman remembers snaking his way outside the burning building, where in a stupor he noticed a comb that appeared to belong to a small child.

"A little girl's comb that was untouched. It was not scorched; it didn't have smut on it," Leech remembered. "It was a pristine red comb sitting off the side, and next to it was a tattered suitcase, and I can remember looking at that and thinking, who did that belong to? What little girl did that belong to?"

Leech served 28 years in the military and now works for the Department of Homeland Security but hopes to return one day to the Defense Department.

Seven years after that horrible day, Leech visited the chapel at the new Pentagon Memorial, a two-acre park, which opens to the public Thursday. It was built at the spot where Flight 77 plowed into the Pentagon and will be open 24 hours a day, seven days a week.

Thumbing through a condolence book in the chapel, he found the friend whom he was with that day, Navy Capt. Jack Punches. He wrote, "Thanks Jack for serving and dying for our nation -- John Leech."

All About September 11 Attacks • The Pentagon