MIAMI, Florida (CNN) -- The condition of a kite-surfer thrown airborne into a Fort Lauderdale building by strong winds this week has improved, his mother said Wednesday. 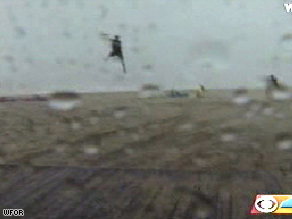 Wind lifted Kevin Kearney over a Fort Lauderdale beach before slamming him into a building Monday.

Monday's incident, which a television crew captured on video as Tropical Storm Fay approached Florida, left the 28-year-old Kearney with spinal fractures, brain swelling, a broken rib and a broken ankle, among other injuries.

Kearney was harnessed to a kite, or sail, along a Fort Lauderdale, Florida, beach when strong wind caught the kite, sending him into the air, WFOR-TV reported.

WFOR video shows Kearney rise into the air before slamming into the beach and being dragged for a brief time along the sand.

The kite then lifted into the air again, slamming him into a nearby building, WFOR reported.

Paradise-Garza said Wednesday her son is able to walk but has spent a lot of time sedated at the hospital so his injuries could be treated.

She said Kearney has no recollection of what happened, and that no one has yet shown him the footage of Monday's incident.

In a statement given to the news media the family said Kearney, a Fort Lauderdale resident, is an "experienced kite-boarder."

Kite-surfers stand on boards while winds catch their kites and move them across water. The video showed no board at Kearney's feet while he was airborne.

Kearney's friends said his harness had emergency releases, but that it is possible things happened too fast for him to unhook his clasps, WFOR reported.

All About Fort Lauderdale • Injuries and Traumas • Spinal Cord Injuries