(CNN) -- More than 200,000 children were spanked or paddled in U.S. schools during the past school year, human rights groups reported Wednesday. 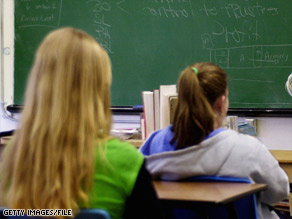 Schools in 21 states can use corporal punishment.

"Every public school needs effective methods of discipline, but beating kids teaches violence, and it doesn't stop bad behavior," wrote Alice Farmer, the author of a joint report from Human Rights Watch and the American Civil Liberties Union. "Corporal punishment discourages learning, fails to deter future misbehavior and at times even provokes it."

Corporal punishment in schools remains legal in 21 U.S. states and is used frequently in 13: Missouri, Kentucky, Texas, Oklahoma, Arkansas, Louisiana, Mississippi, Alabama, Georgia, South Carolina, North Carolina, Tennessee and Florida, according to data received from the Office for Civil Rights at the U.S. Department of Education and cited in the report.

The highest percentage of students receiving corporal punishment was in Mississippi, with 7.5 percent of students. The highest number was in Texas, with 48,197 students.

"When you talk to local school officials, they point to the fact that it's quick and it's effective -- and that's true," Farmer said. "It doesn't take much time to administer corporal punishment, and you don't have to hire someone to run a detention or an after-school program."

But she said, "We need forms of discipline that makes children understand why what they did was wrong."

In addition, corporal punishment can be linked to poverty and lack of resources. For instance, the report said, "Teachers may have overcrowded classrooms and lack resources such as counselors to assist with particularly disruptive students or classroom dynamics."

Watch how one Texas family feels about corporal punishment »

The punishment is disproportionately applied to black students, according to the organizations. During the 2006-07 school year, for instance, black students made up 17.1 percent of the nationwide student population but 35.6 percent of those paddled at schools.

Black girls were paddled at twice the rate of their white counterparts in the 13 states using corporal punishment most frequently. And although boys are punished more often than girls, the report found that African-American students in general are 1.4 times more likely to receive corporal punishment.

In addition, special education students with mental or physical disabilities were more likely to receive corporal punishment, according to the ACLU and Human Rights Watch.

Evangelical leader James Dobson's influential Focus on the Family group is among those stopping short of calling for a full ban on paddling in schools.

"Corporal punishment is not effective at the junior and senior high school levels, and I do not recommend its application," Dobson said on the organization's Web site.

"It can be useful for elementary students, especially with amateur clowns (as opposed to hard-core troublemakers). For this reason, I am opposed to abolishing spanking in elementary schools because we have systematically eliminated the tools with which teachers have traditionally backed up their word. We're now down to a precious few. Let's not go any further in that direction."

Andrea Cancellare said her then-13-year-old son was paddled -- or "swatted" -- three years ago for flicking rubber bands in class, despite the fact she had written a letter directing school officials in Alpine, Texas, not to use corporal punishment against him. School officials told her they could not find the letter when she complained.

When she approached the principal and superintendent, Cancellare said, they told her that "most parents like this because it takes care of the punishment. It gets the kids back in class. It doesn't disrupt instruction. It's like the quick and dirty way of dealing with discipline problems."

Alpine Independent School District Superintendent Jose Cervantes said that both the principal and superintendent have taken other jobs, but for the past several years, the district has had a clear policy allowing parents to sign a waiver form and opt out of corporal punishment.

"It works on some, and it doesn't work on others," Cervantes said. "If you're one of the individuals that it does work on, yes, it will become a deterrent."

Cancellare disagrees. "I don't think it's the school's place to make decisions like that," she said. "I'm not necessarily in favor of that kind of punishment in the house either, but I feel like if somebody makes that decision, it should be the parent."

Most states typically leave it up to individual districts whether to use corporal punishment, and some of the nation's largest school districts -- among them Houston and Dallas, Texas; Memphis, Tennessee; Atlanta, Georgia; and Mobile County, Alabama -- have banned the practice, according to the report.

See where corporal punishment is legal »

CNN's Tracy Sabo and Vivienne Foley contributed to this report.