Join Roland Martin for his weekly sound-off segment on CNN.com Live at 11:10 am ET Wednesday. If you're passionate about politics, he wants to hear from you. 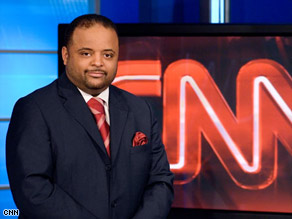 Roland Martin says Bill Clinton relied on black support during Lewinsky scandal and now must earn it back.

Stuck in no man's land, no longer able to stand before adoring crowds of African-Americans who would welcome him as the "nation's first black president" with thunderous applause and all kinds of pats on the back, he clearly is having issues dealing with the new world order.

Almost two months after Sen. Barack Obama captured the Democratic presidential nomination, the former president is still brooding about his wife's loss. And his chief source of anguish? That supporters of Barack Obama accused him of injecting race into the campaign.

Never mind that the Obama camp -- loaded with white male advisers -- was so afraid to bring up race that it wasn't funny.

When Bill Clinton compared Sen. Barack Obama's win in South Carolina to that of the Rev. Jesse Jackson, it was seen by African-Americans as an attempt to marginalize Obama. That has always been a fear of African-Americans who achieve mainstream success -- and it left even close friends of the Clintons aghast.

That was the tipping point, along with other perceived slights -- and we know a person's perception is his or her reality.

What Bill doesn't understand is that the masses of black people know what it feels like to be marginalized, and many saw that in those comments.

In an interview with ABC's Kate Snow, Clinton, when asked about regrets in the campaign, immediately threw out, "I am not a racist."

He kept insisting that he isn't angry, but we've all seen that stare, change in body language, and the parsing of words. Even when Snow asked whether Obama was ready to be president, Clinton answered in the third person, never actually saying he's ready or not. The only thing left was the eruption, and he promised to share all in January after the November election.

Bill, we get it. You're still peeved. At Obama. At Rep. James Clyburn. At the media. At anyone who you determined was against you and Hillary.

Many have said that Clinton wants his legacy intact, and a lot of that has to do with the reality that no group gave him more comfort than the black community.

When he was facing the end of his presidency, he called on black folks like no others, using the love and affection to get him through the Monica Lewinsky scandal. He relied on black support to keep his poll numbers high. And we all know it.

But what Bill knows -- and we know -- is that you don't have to be a racist to use race as a tool in a political campaign. An inference here, a comparison there, and you can send the right signal at the right time, to the right people. He says he did nothing wrong. Yet perception is very powerful, and denying it doesn't make it go away.

Bill, and the legions of Clinton supporters and former campaign aides, are quick to act as if the comments made by African-Americans -- the regular folk -- simply didn't exist. That was his bread-and-butter group, and its members were none too happy.

But what the Clinton folks also fail to grasp is that they did offend older African-Americans like Clyburn, and Dr. Johnnetta B. Cole, and others who were always in the corner of the Clintons, but could no longer remain silent.

It's clear that Bill can't deal with the fact that his black supporters didn't stay quiet. Many of them recoiled at what they heard, and didn't offer the Clintons cover.

As for what's next, some Hillary Clinton fundraisers have said Obama should help restore Bill's reputation and show respect for both Clintons, according to the Huffington Post. But the truth is that there is nothing that Obama can do to salvage the reputation of Bill Clinton before most African-Americans.

Bill lost that on his own, and he's going to have to get it on his own.

And the Clintons need to stop living in la-la land, listening to the same folks soothe Bill's bruised ego. They thought they would win the nomination and then blacks would fall in line. Harold Ickes said as much.

But in this new world order, when young black folks don't see Bill as the Great Messiah and really didn't have a love affair with his eight years, he needs to recognize that a lot has changed.

Bill, you clearly have issues with what took place, and sure, you can be mad. But denying you're angry doesn't help.