WASHINGTON (CNN) -- It would cost at least $140 billion to repair all the nation's bridges if work began immediately, a nationwide safety organization said in a comprehensive report Monday. 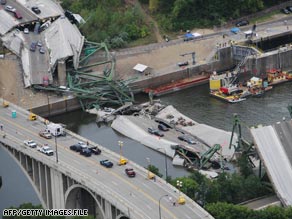 The report was released days before the first anniversary of the I-35W bridge collapse in Minneapolis, Minnesota.

The price tag will rise if the repairs are delayed, the group said.

Nearly one in four bridges needs repairs, and the average age of America's bridges is 43 years -- seven years shy of the maximum age for which most are designed, according to the report, titled "Bridging the Gap."

One in five U.S. bridges is more than 50 years old, the report says.

Find troubled bridges in your state »

"Almost one in four bridges, while safe to travel, is either structurally deficient, in need of repair, or ... too narrow for today's traffic volumes," the report from the American Association of State Highway and Transportation Officials said.

It was released days before the first anniversary of the collapse of the Interstate 35W bridge in Minneapolis, Minnesota, which killed 13 people and injured 144.

Rising oil prices have contributed to an increase of at least 50 percent in the price of steel, asphalt, concrete and earthwork over the past 2½ years, the report says, forcing repair delays.

"Nearly every state faces funding shortages," it says, preventing them from doing work to "keep their bridges sound indefinitely."

The report says the country's bridges are safe, but it calls for investment, research and innovation, proper maintenance, public awareness and new financing options to keep them in good condition.

It identifies what it calls "a frustrating contradiction" -- better engineering, materials and construction techniques are available, but "without a national commitment to bridge investment," states cannot afford the improvements.