Being black can mean being a suspect

(CNN) -- For Anthony Williams, being black in America means being a suspect. 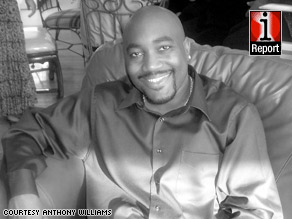 Anthony Williams says he feels like he's always a suspect to police.

The 39-year-old former Marine said he's never had any trouble with the law, other than a few traffic violations, and leads a middle-class life in the Atlanta, Georgia, area.

But the AT&T customer care representative said he still gets nervous when he hears that police are looking for a 6-foot-tall black man, "because I know I fit that description."

"I worry I will get pulled over and some police officer decides to shoot first and ask questions later," Williams wrote.

Police recently questioned him in his own driveway after getting complaints that a man was walking in neighbors' yards, Williams said. iReport.com: Tell us what you thought of "Black in America."

"You never know what to expect when you get pulled over by police, and that's how it is when you're black," he said.

Vince Priester of Lithonia, Georgia, said the documentary was "intriguing and moving" and showed that "with all the change we've made as a society, things really haven't changed" for black people.

"You have to tone yourself down when you're around white people," he said. "There's nervousness from white women when I share an elevator with them; they put their hand on their pocketbook."

"You have to almost change yourself, dilute yourself, to live in a white society," he said. iReport.com: Vince Priester describes being black in America

We asked iReport.com writers and readers to share their reaction to part one of the four-hour documentary "Black in America." Dozens of people have responded in the hours since the show ended.

Ayana Gooden, a 34-year-old artist, musician and Web designer in New York, said that she enjoyed the show but that it missed one question: Why?

"To look at how things are in the present, you really have to look at the past," she said.

Slavery and segregation have left deep scars that take generations to heal. She said her own parents couldn't vote without harassment for a third of their lives.

"The whole single mom thing and people not being married ... back in the day, especially during slavery time, black people weren't allowed to be married," she said.

She said her grandfather wasn't allowed to go to school past the sixth grade.

"It's not just bad decision-making. It was a whole set of values that were not learned, so they can't be passed down," she said.

Nicole Adams of the Bronx, New York, said that she enjoyed the show but that there were too many issues to cover in just four hours.

"How do you speak about black women and not talk about depression, which is a battle that many women, including myself, face every day?" she asked.

Adams also questioned the emphasis on two-parent families, saying that "the character of the people in the household and not the number was the real determining factor."

The 37-year-old grew up with a mom and a dad but said their relationship was dysfunctional.

"I didn't have a model of a healthy relationship, so I didn't know how to participate productively in a relationship," she said. "I fought so hard not to be like my mom .. that I sabotaged my own relationship."