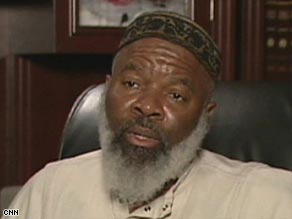 Siraj Wahhaj is imam of a Brooklyn mosque and a backer of pro-Islam ads on New York subway cars.

"I have no problem with the ad itself, but I have a very, very real problem with those behind it," Rep. Peter King, a New York Republican, said Tuesday. He is urging the Metropolitan Transit Authority to reject the ads.

The campaign is to feature ads on 1,000 of the subway system's roughly 6,200 cars. The main sponsor is a grass-roots organization, Islamic Circle of North America.

The ads, simple black-and-white panels, will feature key words or phrases about Islam on one side of the panel such as "Head Scarf?" or "Prophet Muhammad?" and the words "You deserve to know" along with the Web site address WhyIslam.org on the other side.

"The idea is to evoke certain thoughts in the mindset of the person who is looking at the ads and get them to a point where they can reflect upon certain words that one could define as hot words or keywords that get thrown around a lot but are not necessarily defined in the most proper context," said New York University's Imam Khalid Latif, a cleric who is promoting the project in a YouTube video created by the Islamic Circle.

Another of the backers of the advertising campaign -- which will launch in September to coincide with the monthlong Islamic holiday of Ramadan -- is Siraj Wahhaj, imam of a Brooklyn mosque.

Wahhaj was the first Muslim to lead a prayer before the House of Representatives, but King objects to him because he was a character witness for convicted 1993 World Trade Center bombing mastermind Sheikh Omar Abdel-Rahman.

"He is a known Islamic extremist, and you would be giving him credibility and stature through a known government facility," said King, ranking member of the Homeland Security Committee.

Wahhaj also appeared on a list of 170 potential unindicted co-conspirators in the 1993 bombing case. A prosecutor said that not everyone on the list was considered a co-conspirator.

On Monday, New York Mayor Michael Bloomberg did not join in King's outrage about the ads.

"If you were to advocate becoming a Muslim, I assume the First Amendment would protect you," he said.

But King, noting that the ads would be up during the seventh anniversary of the September 11 attacks, said, "I'm calling on the MTA not to have these ads, not to go forward with them, and I don't see this as a free speech issue at all."

King said he sent a letter to the MTA on Monday night demanding that it reject the ads.

The New York Post has reacted strongly to the ads, running a cover photograph of Wahhaj on Monday with the headline "Jihad Train" and posting an article on its Web site with the headline "Train-ing day for jihadists" and the first paragraph saying, "Allah aboard!"

Abdel-Rahman and nine others were convicted in 1995 of seditious conspiracy for their role in a plot to bomb the United Nations, FBI headquarters in Manhattan, two tunnels in New York and a bridge connecting New Jersey with Manhattan, all in one day.

The government said the group also was responsible for the February 26, 1993, World Trade Center bombing that killed six people and injured more than 1,000.

Andrew McCarthy, a former federal prosecutor in that case, said Wahhaj's name was included in a filing that prosecutors were required to provide to defense attorneys in the case, a list of all the names of people who could possibly be foreseen to come up in the evidence. The filing, McCarthy said, has been called a "co-conspirator list." But Wahhaj was never named by the prosecution.

"The only time he came up in a meaningful way before the jury is when the defense called him as a witness," McCarthy recalled.

McCarthy said that although the list named anyone the government might allege during the trial was a co-conspirator, not everyone on the list was so labeled.

Wahhaj said Monday that he was a character witness for Abdel-Rahman in the context of "what we knew about him before the incident," citing him as a "scholar in Islam" and "a great reciter of the Quran."

"People try to make the connection as if I'm endorsing some bad deeds that [were] done by Sheik Abdel-Rahman," he said. "That had nothing to do with it."

He added, "not only have I never been charged with anything, not one FBI agent has ever asked me one question in relationship to that bombing."

Wahhaj also said that he regrets some of his more controversial statements, such as calling the FBI and the CIA "terrorists."

"What I was saying is that not all the FBI or CIA are terrorists, but there are some elements in there," he said. "So if you want to accuse some Muslims [of being terrorists], OK. These Muslims did that, but don't undermine the entire faith. That's what the message is."

Wahhaj said the New York Post's "cheesy" and "anti-Islam" reaction to his participation in the Subway Project is "the very reason the young Muslims want to put out this ad campaign."

Islamic Circle spokesman Azeem Khan called the situation a "perfect microcosm" of what the ads seek to address: that Wahhaj's portrayal in media reports is similar to how Islam is often depicted.

"I think that even more so reinforces the idea as to why a project like this is necessary, where Muslims have to be more pro-active in terms of educating people about their religion, by no means proselytizing the faith in any capacity, but really setting a standard and defining what mainstream Islam stands for," Latif said.

The project is the Islamic Circle's first such advertising campaign. The group has run ads before but not on New York's subways.

The transit authority said the cost of the monthlong campaign is about $48,000.

All About Islam • Religion