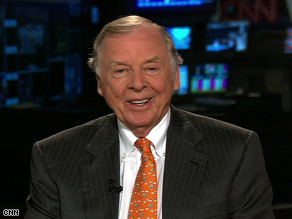 T. Boone Pickens speaks with CNN about his energy plan he says will decrease U.S. dependency on foreign oil.

CNN's Lou Dobbs talked to him Monday about his plan.

DOBBS: Let's be clear, President Bush has put the pressure on Congress to drill or not to drill off shore. There are vast deposits of natural gas lying offshore and throughout this country and it's a potentially important alternative to foreign oil and other energy sources as well. The Energy Department now reports that with the current technology that the United States has access to 1,744 trillion cubic feet of natural gas. That's a lot. And Americans consume roughly 23 trillion cubic feet each and every year. At that rate, we have enough natural gas to satisfy the demand for the next 75 years. Conceivably, more natural gas could become available with technological advances and discovery.

One man who is calling for Congress to stop its partisan fighting and work together on offshore drilling is oil man T. Boone Pickens. He recently unveiled his Pickens plan aimed at reducing our dependency on foreign oil. He is the author of the upcoming book, "The First Billion is the Hardest." The book will be published in September. T. Boone Pickens joins us now from our bureau in Washington, D.C. Boone, good to have you with us.

DOBBS: I've got to say this first, I've got to be clear. You and I have known each other for nearly 30 years. And throughout that time, whatever you were involved in, you were always at the forefront. You are coming our right now -- I've got to give you credit. You are talking straightforward about what to do and how to fix a problem while not another single elected official, another business association, because most businessman now are represented by the Chamber of Commerce or the Business Roundtable and haven't got the guts or the vision, apparently, to talk for themselves. I want to compliment you for doing so, if I may.

PICKENS: Thanks, Lou. The problem is unbelievable for this country. We are in a crisis mode and let me give it to you right quick. We're spending $700 billion a year on foreign oil, $700 billion. We're going to break the country in less than 10 years and we're now importing almost 70 percent of all the oil we use. iReport.com: How are you using alternative energy?

DOBBS: Seventy percent. And back when the first OPEC oil embargo began, back in 1973, OPEC won. What was it, about 20 percent?

PICKENS: Twenty percent. 1991 it was 42 percent. And I said then, we're going to be 60 percent at the end of the century. We were at 60 percent -- I was told I was a fool. I didn't know what I was talking about. I can tell you now, you're almost 70 and you're going to be importing in 10 years from now. So we've got to do something about it and we can, Lou. The solution for it is natural gas. Natural gas can replace foreign oil.

DOBBS: Now, your plan is to have natural gas move into transportation, correct?

PICKENS: That's correct. It already is. There are 8 million vehicles around the world on natural gas and only 142,000 of them are in the United States. Can you believe, I mean, with our leadership, did not take us in the right direction. But not trying to place blame, it's really our problem. Yours, mine, and the rest of the people in America.

DOBBS: You're exactly right. And the cost of conversion to natural gas for large vehicles, those dinosaurs or the gas guzzlers are the ones in many cases that are most readily convertible to natural gas, are they not?

PICKENS: I'm not interested in passenger car near as much as I am in heavy duty equipment. The government should move quickly to mandating that all new vehicles that be purchased by the government would be natural gas vehicles. General Motors has 19 different vehicles they make but none in the United States. All of them out of the country. South America and Europe.

PICKENS: But here's what is interesting. Gazprom last week, the biggest company in the world, Russia, they announced that they were going to put natural gas fueling stations all over Europe. Now, that's interesting because it tells you that we're behind again. We're behind again. Here we are. We have natural gas, which is cleaner, cheaper, abundant and domestic.

DOBBS: And let's be clear about this, too, Gazprom, the Russian oil and energy company, is not doing it out of the goodness of its heart, it's driving profits but at the same time creating greater dependency in Europe, Western and Eastern Europe on Russian energy because of the pipelines that move from Russia into Europe. So there's a strategic plan behind what they are doing as well. There is no strategy in this country whatsoever, even as a consumption economy we don't have a plan.

PICKENS: We have not had a plan in 40 years, Lou. What I want to do is to fold in the great resource we have in the central part of this country, which is wind. And then you have resource from Texas west to California. You've got solar. Those two resources have to be developed. So when you develop the wind, you can then remove natural gas from power generation and put it into a transportation fuel market. We can do that; and is it easy? Almost easy. There have to be some things, some hurdles to clear. But when you take that natural gas out of power generation and put it into transportation fuel, that's 22 percent of that 23 trillion. That amount, you put into transportation would reduce our imports by 38 percent.

DOBBS: I'm going to round it off to 40 percent. That's an immense impact immediately. It's about $300 billion that you would save a year.

DOBBS: More on the out years as we move into the next decade. Where you estimate, we could be transferring as much as $10 trillion in wealth from this country to primarily to the Middle East and to other oil-producing nations unless we change directions and do so quickly.

PICKENS: ... of the oil we import comes from the Mideast and Africa. The two most unstable areas. And if we did this, we can do it in five to 10 years, and we could get away from that dependency of 38 percent.

DOBBS: Now, I want to point out, Boone Pickens is not only offering a plan and solution and strategy, he's also investing his money in wind power while others are talking about it. And posturing and playing some ideological and partisan games. Boone Pickens, as always, it's a great pleasure to talk with you. Thanks for looking out for the country. We appreciate it.