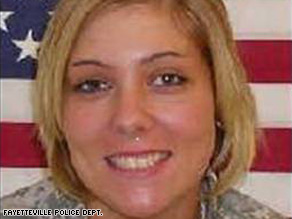 Authorities have been searching for the missing soldier, Army 2nd Lt. Holley Wimunc, 24, since a fire torched her North Carolina apartment on July 10.

Alden was charged with felony accessory after the fact to first-degree murder, Bergamine said.

Both were taken to Cumberland County's jail and held without bond, he said.

Earlier, a witness found a charred body in woods, but Detective Jeff Locklear told reporters that police were still awaiting a positive identification from the medical examiner and could not say for certain it was Holley Wimunc.

The lieutenant's father released a statement about the death Monday in which he said his daughter was a nurse at a military hospital and had two children.

"It is with profound sadness that our family just received the news from authorities that our beloved daughter Holley is dead," Wimunc's father said in a statement released to CNN affiliate WRAL in Raleigh, North Carolina.

"Since last Thursday's shocking news about Holley's burned apartment and her missing person status, our family through the country has nonetheless been holding on to a thin thread of hope that she would be found alive."

Military officials said both Marines were stationed at Camp Lejeune, which is about two hours away from Wimunc's Fayetteville home.

Joe Lenczyk -- resident agent-in-charge for the federal Bureau of Alcohol, Tobacco, Firearms and Explosives -- said Wimunc and her husband were estranged and lived apart.

Wimunc is the second female soldier from Fort Bragg to die under suspicious circumstances in recent weeks.

Spc. Megan Lynn Touma, 23, was seven months pregnant at the time of her death in June, authorities said. Investigators say they are treating that death as a homicide.

Camp Lejeune also has had a suspicious death of a female soldier this year. Twenty-year-old pregnant Marine Lance Cpl. Maria Lauterbach's charred body was found January in the back yard of another Marine stationed at the base.

That suspect, U.S. Marine Cpl. Cesar Laurean, was captured in April in Mexico.

All About Fort Bragg • Murder and Homicide • North Carolina