Q&A: How Fannie, Freddie and IndyMac affect you

(CNN) -- Fannie Mae and Freddie Mac were created to help individuals realize the American dream of home ownership, but they now find their survival at risk in the U.S. mortgage crisis. 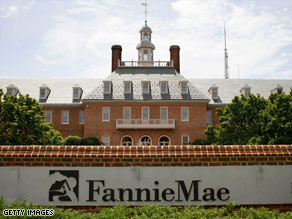 Steps to shore up FannieMae and Freddie Mac could eventually stabilize home prices.

On Sunday, the Treasury Department and Federal Reserve announced steps to make funds available to Fannie Mae and Freddie Mac if necessary.

IndyMac, which reopened Monday under federal supervision, was once one of the nation's largest home lenders. Thanks in part to the nation's mortgage crisis, it lost hundreds of millions of dollars this year and last, and concerns about the bank led customers to withdraw $1.3 billion in the last two weeks, prompting the government takeover.

Below, CNN's Ali Velshi and Gerri Willis answer questions about Fannie Mae, Freddie Mac and IndyMac and how you may be affected.

Q: What are Fannie Mae and Freddie Mac and what do they do?

A: Originally chartered by Congress, both were converted into private companies with shares traded on Wall Street. Neither company directly loans money to prospective home buyers. Instead, they buy mortgages from banks and other lenders on the secondary market, thus freeing up more funds to home lenders. They resell bundled loans as mortgage-backed securities.

Combined, the two companies own or guarantee almost half of the home loans in the United States, or $5.3 trillion of mortgage debt.

Q: How did they get their names?

A: Fannie Mae was created in 1938, during the Great Depression. The nickname comes from the acronym FNMA, which stands for Federal National Mortgage Association.

Freddie Mac was chartered by Congress as a private corporation in 1970 to end Fannie Mae's monopoly over the secondary mortgage market. The name Freddie Mac spawns from the acronym FHLMC, or Federal Home Loan Mortgage Corp.

Q: What's the connection between the IndyMac takeover and Fannie Mae and Freddie Mac?

A: Nothing, except both crises stem from the same problem: a drop in home prices and the inability of mortgage-holders to make their payments, thereby leaving banks (whether it was IndyMac, an actual lender, or Fannie/Freddie, the secondary banks that had bought mortgages) holding the bag.

Q: Will the government's actions change the value of my home?

A: Steps the federal government is taking to shore up Freddie Mac and Fannie Mae is ultimately a positive for the housing industry. Although it won't happen overnight, housing prices could be stabilized by the move. The reason? These two institutions are critical to the smooth functioning of the mortgage underwriting industry.

Q: Is my money safe in the bank?

A: Up to certain limits, money is safe in banks insured by the Federal Deposit Insurance Corp. The FDIC guarantees traditional bank accounts up to $100,000 and individual retirement accounts up to $250,000.

Money beyond those limits isn't guaranteed if a bank fails. In the case of IndyMac, the FDIC says it will cover 50 percent of uninsured balances there. But as a practical matter, consumers shouldn't count on that. Bottom line: Owning accounts with amounts that exceed the FDIC limits is like driving without a seat belt.

Watch: Is your bank safe? »

Q: How are the government's moves to help Fannie Mae and Freddie Mac going to affect mortgages, loans and the federal budget deficit?

A: Shoring up Freddie Mac and Fannie Mae is good news for consumer lending lending generally because it boosts confidence in the mortgage markets. If you already have a loan, it's won't have immediate consequences. We don't yet know if it will be successful and how much the two entities might take advantage of the federal governments offer to lend them money. For that reason, it's difficult to say what the impact might be on the federal budget deficit. Suffice it to say, however, that the buck always seems to stop with the American taxpayer.