ATLANTA, Georgia (CNN) -- Two of the Rev. Martin Luther King Jr.'s children are suing their brother, accusing him of wrongfully taking money from their parents' estates. 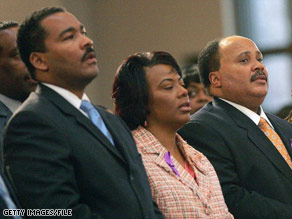 The suit, filed Thursday in Fulton County Superior Court, serves as a very public fissure in an iconic family that has always professed unity, particularly as questions have swirled around some of their financial dealings.

In a written statement Friday, Dexter King called the suit "inappropriate and false."

"I'm disappointed that our personal family disagreement, as it relates to the family business, has evolved into being handled in a public legal forum," he said.

"It is my hope that this inappropriate and false claim by my siblings will be swiftly resolved and we can go about the business of focusing on our parents' tremendous legacy."

The Rev. Martin Luther King Jr. was assassinated in April 1968 in Memphis, Tennessee, where he was to lead garbage workers on a protest march.

Attorneys for Bernice King and Martin Luther King III would not say Friday how much money they are accusing Dexter King of taking from their mother's estate.

Bernice King is the administrator of that estate. Dexter King, the suit says, controls their father's estate, which is registered as a Georgia corporation.

All three children are shareholders in that corporation.

The lawsuit names Dexter King and the corporation as defendants. It alleges that last month, the defendants "converted substantial funds from the estate's financial account at Bank of America for their own use."

Harmon Caldwell, an Atlanta attorney representing the plaintiffs, said Dexter King is a signatory on the account, but "was not authorized to transfer the funds," and gave his sister "no notice that those funds were being transferred."

The suit says that as a result of the transfer, "plaintiffs have and will suffer financial loss."

The lawsuit lists Bernice King as a plaintiff both individually and as administrator of their mother's estate.

Separately, the suit says Dexter King "has wrongfully appropriated assets belonging to the [estate of the Rev. Martin Luther King Jr.] or its shareholders for his own benefit."

Caldwell said Dexter King has refused to say what has happened with some of the corporation's money.

The plaintiffs' attorneys would not estimate the size of either estate. But one, Jock Smith, noted that a collection of King's manuscripts and other items was sold in 2006 for a reported $32 million.

"I don't think it was a substantial corporation of any sort before that," Smith said.

Over the years, the family of the civil rights leader has zealously protected its financial interests, at times taking legal steps even against the media for showing some of King's most famous speeches.

In 2005, some news agencies reported on the King Center, a nonprofit, having put millions of dollars into a for-profit business run by Dexter King. The family rejected allegations of wrongdoing, and has generally pushed to keep financial matters private.

Smith said his clients made repeated efforts to reach out to their brother in recent weeks before deciding to take legal action.

Smith agreed with the suggestion that it was emotionally tough for the King children to file the suit.

"That would be the understatement of the year, Smith said.