WASHINGTON (CNN) -- The Senate on Thursday confirmed Gen. David Petraeus as the new chief of U.S. Central Command, placing him in charge of American forces in the Middle East and Afghanistan. 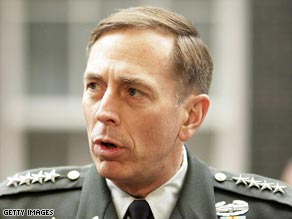 The Senate votes 95-2 to confirm Gen. David Petraeus in his new position.

Petraeus has served as the top U.S. commander in Iraq since January 2007 and has led the 15-month "surge" effort aimed at pacifying Baghdad and its surrounding provinces. His new post gives him the additional responsibility of leading American forces in the tense Persian Gulf region and managing the war in Afghanistan, where U.S. and allied troops are battling a resurgent Taliban and its al Qaeda allies.

The Senate vote was 95-2, with Democratic Sens. Robert Byrd of West Virginia and Tom Harkin of Iowa voting against confirmation. Harkin was the sole dissenter in the 96-1 vote to confirm the promotion of Petraeus' second-in-command, Lt. Gen. Raymond Odierno, to four-star rank and to replace his boss in Baghdad.

Sen. Carl Levin, chairman of the Senate Armed Services Committee, said the moves will provide "continuity of leadership" in the region.

But in a written statement, Harkin's office said neither Petraeus nor Odierno would take steps to begin withdrawing U.S. troops from Iraq "so that our country can begin to more effectively address the very real threat posed by terrorists around the globe."

He said Odierno, while he was a division commander, failed to recognize the spread of the insurgency that followed the fall of Baghdad.

"As we know, the failure to correctly assess the nature of the insurgency helped fuel years of violence in Iraq," the statement said.

Byrd, meanwhile, accused Petraeus of hedging his answers about other regional issues during his confirmation hearing and said the general should remain in Baghdad to continue managing the campaign he launched in 2007.

"Gen. Petraeus' career will be judged in large part by his role in the Iraq conflict," Byrd said. "His reticence to address other regional issues raises questions about his willingness to devote the focus and the resources needed to address them properly."

While Petraeus will continue to oversee the war in Iraq from his new job, the general "will also be responsible for addressing an increasingly violent insurgency in Afghanistan and other important national security interests throughout the CentCom region," said Levin, D-Michigan.

Among those other issues is Iran, which the United States accuses of meddling in the five-year-old Iraq war and of pursuing nuclear weapons. Iran conducted a series of missile tests on Wednesday, and Israel conducted an air force exercise over the eastern Mediterranean Sea in June that U.S. officials suggest was meant as a show of strength toward the Islamic republic.

President Bush named Petraeus to the Central Command post after the March resignation of Adm. William Fallon, who said reports that he was at odds with the Bush administration over how to deal with Iran had made it impossible for him to continue in that job.

Petraeus led the Army's 101st Airborne Division during the 2003 invasion of Iraq and drew praise for his management of the occupation forces in the northern part of the country, including the city of Mosul. He also led efforts to train a new Iraqi army and was one of the major writers of the Army's counterinsurgency manual.

After Iraq plunged into a spiral of sectarian killings and reprisals in 2006, Bush ordered an additional 30,000 troops into the conflict and put Petraeus in command. Coupled with U.S. support for Sunni Arab tribal leaders who turned against al Qaeda in Iraq and a cease-fire by anti-American Shiite leader Muqtada al-Sadr, that offensive has contributed to a sharp drop in the sectarian warfare that ravaged Iraq for 1½ years -- gains the Pentagon calls promising but still fragile.

Odierno commanded the Army's 4th Infantry Division in the early months of the insurgency against U.S. troops. He has spent the past year as the deputy commander of U.S. and allied forces in Iraq.

"They're highly experienced -- indeed, specially trained -- because they have served a number of times in Iraq," said Sen. John Warner, R-Virginia, a leading Republican on the Armed Services Committee.