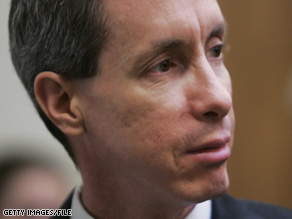 Authorities took Jeffs from an Arizona jail to a Nevada hospital on Tuesday after he saying he looked feverish and was "acting in a convulsive manner, and looked in a very weakened state." Doctors there determined he should go to a larger facility, so Jeffs was flown to the Sunrise Medical Center in Las Vegas.

Sheriff Tom Sheahan of Mohave County, Arizona said before Jeffs' release that his condition was not believed to be life-threatening.

Further details about his release on Wednesday were unavailable.

Sheahan said he is trying to get information about Jeffs' condition.

Watch how authorities are mum about Jeffs »

The 52-year-old is the leader and so-called prophet of the estimated 10,000-member Fundamentalist Church of Jesus Christ of Latter-day Saints, an offshoot of the mainstream Mormon church.

The FLDS openly practices polygamy at its Yearning for Zion Ranch outside Eldorado, Texas, along with two towns straddling the Utah-Arizona state line -- Hildale, Utah, and Colorado City, Arizona.

The charges against Jeffs are Class 6 felonies under Arizona law, Piccarreta said, meaning that a judge -- upon conviction -- will determine whether the charges are misdemeanors or felonies. Other charges Jeffs initially faced in Arizona have been dismissed, said Piccarreta.

In November, Jeffs was sentenced in Utah to two consecutive terms of five years to life in prison after his conviction on two charges of being an accomplice to rape in connection with a 2001 marriage he performed between a girl, 14, and her cousin, 19.

According to unsealed court documents, Jeffs refused food and drink for a month in January 2007 and developed ulcers on his knees from kneeling in prayer for hours as he awaited trial.

On January 28, 2007, he attempted to hang himself in his cell, the documents said. In the days afterward while on suicide watch, Jeffs on separate occasions banged his head and threw himself against a wall.

He has been in custody since August 2006, when he was arrested during a routine traffic stop after spending months on the FBI's 10 most-wanted fugitives list.

In April, authorities removed more than 400 children from the YFZ Ranch. Child protection officials said they found a "pervasive pattern" of sexual abuse on the ranch through forced marriages between underage girls and older men.

In June, however, the Texas Supreme Court ruled the state had no right to remove the children. The court also said the state lacked evidence to show that the children faced imminent danger of abuse. The children were returned to their families.

CNN's Saeed Ahmed and Gary Tuchman contributed to this report.