WASHINGTON (CNN) -- The aircraft carrier USS Abraham Lincoln has moved from the Persian Gulf into the Gulf of Oman so its warplanes can fly missions over Afghanistan, where attacks have been rising, the U.S. military said Tuesday. 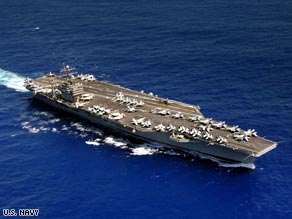 The USS Abraham Lincoln has moved from the Persian Gulf into the Gulf of Oman.

The carrier was ordered to move so it could conduct potential airstrikes over Afghanistan by flying over Pakistani airspace.

If it had remained inside the Persian Gulf, that would not have been possible since U.S. planes do not fly through Iranian air corridors.

The carrier, which arrived Monday, is equipped with F/A-18s and an array of precision weapons.

"This puts it in a position where it has ability to strike far inland," a U.S. defense official said.

President Bush last week acknowledged that June was a difficult month for American and allied troops in Afghanistan, saying a higher death toll there was because troops are taking the fight to Taliban militants.

In May and June, the American and allied death toll surpassed those in Iraq, where there are far more U.S.-led coalition troops.

At a Rose Garden news conference last Wednesday, Bush responded to reporters' questions about the sobering casualty milestones in Afghanistan.

"You know, one reason why there have been more deaths is because our troops are taking the fight to a tough enemy, an enemy who doesn't like our presence there because they don't like the idea of America denying safe haven," Bush added.

All About The Taliban • Afghanistan