(CNN) -- What is patriotism? Is it serving your country during wartime, or making war on injustice in your hometown? Is it gathering with friends and setting off fireworks, or is patriotism a feeling that transcends words? 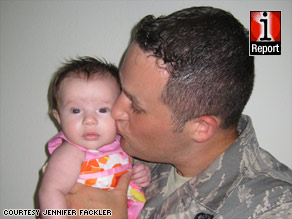 On the heels of Sen. Barack Obama's speech last week explaining his take on patriotism, and in honor of the Fourth of July, CNN asked iReport contributors to share their personal definitions of patriotism.

Jennifer Fackler, whose husband soon will be deployed to Iraq for the fifth time, says, "Patriotism means sacrifice; it means I put our child to bed at night alone; it means I spend sleepless nights by the phone."

An iReporter who goes by Wlutterman calls patriotism "those goose bumps that you get on your arms during a flag ceremony." Another iReporter, Kcikeizer, says patriotism is honoring "the brave men and women who represent our country in the military while expressing our right to object to this war."

Below is a selection of iReport and Sound Off responses, some of which have been edited for length and clarity:

MrPenguin: What is patriotism exactly?

Some say it is unpatriotic to oppose the war, but hear me out: Say if your kid brings home a bad report card. Are you proud of him? Probably not. But do you still love him? Yes.

Andwyg: Patriotism means, to me, celebrating the freedoms we have. Shedding a tear when I hear the national anthem is sung or when I sing it myself. I supported my husband as he served in the U.S. Air Force for eight of his 11 years. Patriotism then was hanging yellow ribbons on my trees while I waited for him to come home.

Now it means telling our son as he grows up about the time his daddy served, his great-grandfathers [who] served along with his second cousins, uncles and great-uncles, and what that means to us as a family. It means making sure that he knows that we are one nation under God and everything that means. It means a respect for our nation's leaders, our flag, and those who serve and have served. It means fireworks, hot dogs, and red, white, and blue T-shirts from Old Navy on the Fourth of July. It means being thankful for the blessings that come with being a citizen of the U.S.A.

hellcat: These fights over patriotism are silly and meaningless. Since when did expressing oneself, as the Bill of Rights guarantees all Americans, become an act of treason or make the speaker less patriotic? Why is it so hard to accept that there are true faults with this country, and that some people have the chutzpah to point them out?

As it seems to me, most of these people who criticize Michelle Obama for her comments are generally white men who've never truly been denied anything due to skin color or gender in their lives. Maybe if they were to spend their time as a person of color and experience the racism that still exists in this nation, they would understand why Mrs. Obama was not truly proud of her country until recently, when the Democratic voters looked beyond color for a candidate.

I don't especially like Obama or McCain for the presidency, but this needling on patriotism is absurd. As some of the Bible thumpers would love to quote, "Do not point out the splinter in your brother's eye and ignore the plank in your own." Knocking down another's individual rights seems more unpatriotic to me than speaking a truth no one wants to hear.

RocketScience: I think the flag pin issue is the dumbest thing I've ever heard. Don't we have more important problems to deal with? And if we're really going to jump on Mr. Obama for not wearing one, chew on this: I went to several other news websites, and I also googled images of John McCain. Nowhere did I find one single picture of him wearing a flag pin. Why aren't people squawking about him not wearing one? Or does being a veteran give him a free pass?

Blueken: To me, true patriotism is staying faithful to our Founding Fathers' dream: that all men are created equal. That governments should have checks and balances provided by the three branches of government -- legislative, judicial and the president. That there should be no taxation without representation. That there should be a separation of church and state. Free speech and the pursuit of happiness.

Our Founding Fathers thought carefully about the forms of government they saw all over the world. They took the best of what they saw and protected us from the worst. We should think long and hard before we tamper with their well-thought out form of government.

Always: Patriotism is action -- that is, service.

And service is more than wearing any uniform. Service lasts a lifetime. It is, each day, being the kind of citizens our grandparents would want us to be and that we would be proud to tell our grandchildren we were. Sappy, yes. Patriotism can be sappy, when one tries to define it. But, simply put, being a patriot means being the best citizen you can be -- contributing in the best manner you can.

caligrl: What is patriotism? For me and my family patriotism mean sacrifice; it means I put our child to bed at night alone; it means I spend sleepless nights by the phone and I wait for letters or e-mails to tell me he is OK. Our story is not unique. We are an Air Force family, and we understand the importance of the work our military does for the world. The legacy we are leaving behind for our children is that "freedom isn't free"; it has been paid for with blood, sweat and many, many tears. As my husband prepares to deploy again next month (for the fifth time), my daughter and I will be here at home serving right along side other brave spouses and their children, because a family that waits also serves.

Kcikeizer: Our family tries to exhibit our patriotism daily by honoring the diversity of belief and culture that this country was founded on. We also honor the brave men and women who represent our country in the military while expressing our right to object to this war and those leaders responsible for leading our country to war.

Greenpaths: How do I express my patriotism? By becoming a part of the solution. By being involved in the community. By becoming an example to others through the way I live. Because I have the freedoms and rights that I can make the choices to help others to help the planet.

It is so important that we start to look deeply within ourselves and make simple changes in our lives so that we can share this great nation with more generations. To teach our children about our land and the beauty of it. Not teach them how to shop in a mall or a box store, but to support our good farmers and shop at local businesses.

Llambo: I was born here; my father fought in two wars, died in one. I've paid taxes and obeyed the law all my life, only to be lied to and ripped off by my own government. Patriotism? It's a buzzword to encourage people to send their young off to war to enable evil people to get rich.

Patriotism is a lie. The Fourth of July no longer has meaning and is simply another excuse for a bunch of people to make noise and get drunk.

MartinT: As the Fourth of July approaches, I reflect on a couple of things. One: I am grateful that my oldest son, the Army kid, is home safe from his second tour in Iraq. My oldest who carries part of my name and half of my soul, and all of my love.

To me patriotism is hating a war that now has sucked both my sons into it, but loving the service and being proud of the young men who serve.

Second: my youngest, the Firedog in the U.S. Air Force, leaves in three weeks to go to Japan, then perhaps to Iraq himself. Patriotism is knowing that I have not seen him in 11 months, and probably won't have the chance to hug him again for 24 more months. This, my son, the little guy who told me when he was only 4 that he wanted to grow up and be just like me. Thankfully, he grew up to be just like himself, better than me, fully the man I could have hoped for, and always the little blue-eyed, blond-haired kid I love so much.

To me, patriotism is being the bigger man, letting them make their own decisions, watching them grow and being proud. I cannot see an American flag without tearing up. I cannot see the picture of a soldier without feeling both pride and fear. I am a better man because of my sons, because they cared enough to serve. This Fourth of July I will be a patriot because to be anything else is unthinkable.

SGTCHAPSWIFE: Patriotism is a word that can take on many different definitions. For my family, patriotism is proudly supporting my husband as he heads off for another deployment, standing by his side faithfully, sending packages and letters daily, waiting for the phone to ring, dreading the door bell, checking my e-mail a million times a day hoping he had five minutes to log on and write me back, putting our kids to sleep giving them kisses from daddy, and explaining to them that daddy will be home soon and he is safe. Support our troops and those who are serving in the silent ranks of military wives.