NEW YORK (CNN) -- To people around the world who have seen the video, Esmin Green is a symbol of a health-care system that seems to have failed horribly. 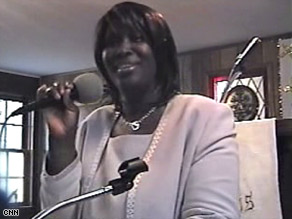 Fellow churchmembers say they served as a family for Esmin Green, shown in 2007, after she left Jamaica.

Green, 49, is shown rolling off a waiting room chair at Kings County Hospital in Brooklyn, New York, on June 19. She lands face-down on the floor, convulsing.

Surveillance video captures her lying on the floor for more than an hour as several hospital workers see her and appear to ignore her. She died there.

But to fellow members of her church, she was known as "Sister Green." Together, they served as a family for her in the decade after she left Jamaica for New York.

Green left six children in Jamaica -- the youngest now 14. She had been sending money home.

Her oldest daughter, 31-year-old Tecia Harrison, told CNN that she cannot bear to think of her mother's last moments.

"I haven't seen it, and I don't think I have the heart or mind to watch it because that's my mother there," Harrison said. "That's the woman who gave birth to me 31 years ago. I cannot watch that."

Green was involuntarily admitted to the hospital's psychiatric emergency department June 18 for "agitation and psychosis."

Friend Peter Pilgrim says he saw Green a few days before her death. He says she was struggling with losing her job at a day care center and had been forced to move out of her apartment.

"Esmin Green is a beautiful person," he said. "She has a good heart. She loved people, and she loved children."

Green's pastor says she had been hospitalized with emotional problems once before and recently appeared to be in distress again. So the pastor called 911, a decision that haunts her.

Upon her admission, Green waited nearly 24 hours for treatment, said the New York Civil Liberties Union, which released the surveillance video of the incident Tuesday.

Her collapse came at 5:32 a.m. June 19, the NYCLU said, and she stopped moving at 6:07 a.m. During that time, according to the organization, workers at the hospital ignored her.

The medical examiner's office says it is still trying to determine what caused Green's death. Her medical records will be the focus of an investigation. Hospital documents say she was "awake and sitting quietly" at the very moment she was actually struggling on the floor.

James Saunders, a spokesman for the corporation, said seven employees have been fired or suspended: the chief of psychiatry, chief of security, a doctor, two nurses and two security guards.

A Health and Hospitals Corporation spokeswoman said it was aware of the discrepancies in Green's record when it began the preliminary investigation June 20.

The corporation pledged to put "additional and significant" reforms in place in the wake of the death.

A federal investigation is also under way, looking into abuse allegations at Kings County that were detailed in a lawsuit in 2007.

In May 2007, the New York Civil Liberties Union and the Mental Hygiene Legal Service sued Kings County in federal court, alleging that conditions at the facility are filthy. Patients are often forced to sleep in plastic chairs or on floors covered in urine, feces and blood while waiting for beds, the groups allege, and often go without basic hygiene such as showers, clean linens and clean clothes.

Among the reforms agreed to in court Tuesday by the hospital are additional staffing; checking of patients every 15 minutes; and limiting to 25 the number of patients in the psychiatric emergency ward, officials said.

In addition, the hospital said it is expanding crisis-prevention training for staff; expanding space to prevent overcrowding; and reducing patients' wait time for release, treatment or placement in an inpatient bed.