NEW YORK (CNN) -- A rare and original manuscript of one of America's most patriotic songs has been discovered in a flea market bargain. 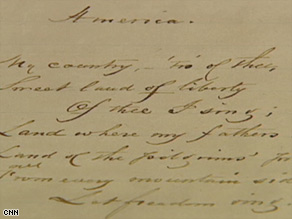 The manuscript of the song could be worth tens of thousands of dollars.

A shopper browsing through the market in New York bought a framed picture of a flower for $10 and found handwritten manuscript of "America" (My Country 'tis of Thee) tucked behind the picture, the manuscript's owner said Thursday.

The manuscript of the song whose lyrics were written by Samuel Francis Smith in 1831 could be worth tens of thousands of dollars, said the owner, art collector Keya Morgan. He said he bought it from the flea market shopper, who has asked not to be identified.

The song was intended to be played in schools to inspire and teach children and was first played in public on July 4, 1831, in the First Baptist Church in Newton, Massachusetts, Morgan said. The song is written to the tune of "God Save the Queen," the national anthem of the United Kingdom.

Take a look at the manuscript »

The authenticity of the document was confirmed by Morgan, a handwriting expert who has been authenticating historical documents for nearly a decade, and Diana Yount, an archival specialist at Andover Newton Theological School. Yount reached her conclusion after comparing the handwriting with that in a hymn written by Smith.

"It's the biggest high I could get," said Morgan. "It shaped the nation and reminds us that this nation is just a baby."

All About History • Music