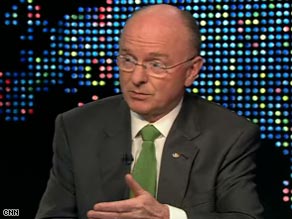 Kennedy: The fastest way for us to solve our energy problems in this country is immediate conservation. If we improve fuel economy standards in our automobiles by one mile per gallon, we generate twice the oil that's in the Arctic National Wildlife Refuge. If we raise fuel economy standards by 7.6 miles per gallon, we can yield more oil than we are currently importing from the Persian Gulf.

O'Reilly: I agree, that first of all efficiency is the very first thing we ought to be working on. And there are new [fuel efficiency] standards in place that will obligate the automobile manufacturers to be more efficient and, in fact, you can see a shift already toward more efficient cars.

We can do that in this country, too, using shifting to electricity and electricity gives us a lot more versatility, it allows us to harness wind. We have -- the Midwest this is the Saudi Arabia of wind. We have enough harnessable wind energy in North Dakota, Kansas and Texas combined to supply all the electrical needs of our country, even if every American were driving an electric car.

We have the Scientific American just published a report that shows in 19 percent of the most barren desert lands in the desert Southwest, we have enough solar energy to provide all the electrical needs of our country. ...

What we need now is a national policy that says, OK, let's go out and get those electrons and get them into the marketplace.

O'Reilly: I encourage all these alternatives. I think there's room for all of them.

When I was a little boy, our country owned half the wealth on the face of the Earth. We are now transferring that wealth at a historic rate to other countries, again, mainly nations that don't like us.

We have solutions. Unfortunately, we have a Congress that's really brain dead. I'll tell you something that the Congress did today. First of all, they killed the investment tax credits for solar and wind which are absolutely vital to the growth of this burgeoning industry.

Second of all, today, Congress and the White House declared a moratorium, a two-year moratorium on any solar plants being built on federal lands while they study supposedly the environmental impact.

O'Reilly: In the first quarter, we made $5 billion, which is 7 percent of sales and exactly the median for all of the industry. ... The percentage has been about the same. You've got to keep in mind that as the revenues are going up, the costs are also going up. So it's not as if this is all going to the bottom line.