(CNN) -- At least six people were dead and one critically injured Sunday after a midair crash between two medical helicopters near a hospital in Arizona, authorities said. 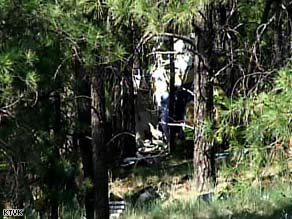 The collision, at Flagstaff Medical Center in Flagstaff, Arizona, set fire to a 10-acre area, according to fire officials, and another two rescue workers were injured by a secondary explosion after the crash.

The helicopters collided at roughly 3:45 p.m. local time, according to the Federal Aviation Administration.

"As you can imagine, we've got lots of heaps of metal to go through," said Capt. Mark Johnson of the Flagstaff Fire Department. "It's just difficult right now."

He said a landing pad on the roof of the hospital is used by medical helicopters.

Federal Aviation Authority officials originally had reported at least seven deaths and three critical injuries, but they revised those numbers after investigators spent more time on the scene.

Flagstaff Police Department Sgt. Tom Boughner said the two rescue workers were not immediately believed to be seriously injured. He said the helicopters crashed into a wooded area near a neighborhood and that no one on the ground was believed to have been injured or killed in the crash.

He said the fire had been contained by Sunday evening.

FAA spokesman Ian Gregor said at least one of those killed in the collision was a patient.

Both helicopters were headed to the hospital at the time of the crash, Gregor said.

FAA safety inspectors from Phoenix, Arizona, were en route to the scene Sunday, and additional inspectors from Washington were expected to arrive Monday morning. The National Transportation Safety Board will lead a probe into the crash, Gregor said.

All About Flagstaff (Arizona)