WASHINGTON (CNN) -- It looked like the makings of a perfect storm of animosity in the last week of the Supreme Court's current term, before it wrapped up for the summer recess Thursday. 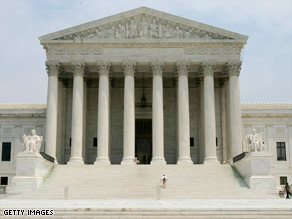 From the drama of deciding hot-button cases to election-year politics and memories of how the last term ended so bitterly a year ago, many wondered whether the justices were privately at each other's throats.

It didn't happen. The court remains divided along ideological lines, but a comfort level in the Roberts Court seems to have kept the animosity at bay, at least for now.

"This term with the Supreme Court, it was just less nasty," said Thomas Goldstein, a Washington appellate attorney and founder of scotusblog.com. "At the end of last term, we had very hard-fought cases on abortion and race in particular, and the justices were visibly angry with each other. But that didn't happen this term.

"We had a big death penalty case; we had the big guns case; we had the detainees case. But, all in all, even though those cases also were closely divided, it was also a much more civil place."

The figures speak for themselves. Of the 67 opinions issued this term, 20 percent were decided by a 5-4 or 4-4 vote. A third of the cases last term produced 5-4 splits.

Legal experts say that has much to do with the fragile conservative majority Chief Justice John Roberts has tried to maintain.

With four mostly conservative justices (Roberts, Antonin Scalia, Clarence Thomas and Samuel Alito) on one side, four more liberal colleagues on the left (John Paul Stevens, David Souter, Ruth Bader Ginsburg and Stephen Breyer) and "swing vote" Anthony Kennedy often in the middle, unpredictability is often the guiding force, especially in the biggest, most contentious cases. Unusual coalitions were formed in individual cases, creating an atmosphere of cooperation by necessity.

"Both wings of the high court were aware that this was an election year, and both wings may have found a certain advantage at not going at each other hammer-and-tongs, the way they have in the past," said Edward Lazarus, a Los Angeles attorney and author of a behind-the-scenes look at the high court.

"I think the liberal wing was glad that it didn't lose too many big cases," he said. "And I think the conservative wing was pleased with some of the victories that they achieved. So this year was a bit calmer, but I wouldn't exaggerate. They're not all getting together singing "Kumbaya" in the court there. There are really deep divisions."

Among the cases decided this term:

• Gun rights: The court tossed out the District of Columbia's sweeping ban on handgun ownership, saying the Constitution's Second Amendment guarantees an individual right to have a weapon in the home for self-protection.

• Death penalty: The court approved lethal injection procedures in Kentucky, making it harder for death row inmates to challenge the most common method of execution nationwide. On the other hand, the justices outlawed executing child rapists, saying that for crimes against an individual, only murderers are death-eligible.

• Terrorism: The court affirmed for the third time since 2004 that the 270 or so accused terrorists and foreign fighters held overseas by the U.S. military have a fundamental constitutional right to contest their detention in federal court. That creates more challenges for the administration's efforts to prosecute war criminal suspects before a military commission.

• Elections: The court backed a voter identification law in Indiana, requiring people to show a government-issued driver's license, passport or similar document when going to the polls. Against a politically tinged backdrop, the ruling gives states discretion to balance possible minority voter disenfranchisement in favor of stopping potential voter fraud.

Generally, the high court handled these big disputes gingerly, avoiding binding pronouncements that could have hamstrung the discretionary power of legislatures and lower courts.

"A lot of these cases were decided on broader majorities on narrower grounds, so they don't turn into these political footballs that you sometimes see from the Supreme Court," Goldstein said. "The big exception has got to be the Guantanamo decision, in which Justice Scalia and the [other three] dissenters on the right of the court basically accused the majority of endangering the lives of Americans directly. And that really did, indeed, become a serious political issue."

In a dissent read with icy tones from the bench this month, 72-year-old Scalia said the majority opinion "warps our Constitution" and went on to warn that "the nation will live to regret what the court has done today" and that "it will almost certainly cause more Americans to be killed."

Even when he is on the winning side, Scalia's language opens eyes. In Thursday's decision affirming an individual's right to have a handgun in the home, Scalia said the dissenters' views were "worthy of a mad hatter." Adding to the "Alice in Wonderland" theme, he said that when it comes to understanding basic linguistics in the Constitution's Second Amendment, the views of his liberal friends "are unknown this side of the looking glass."

Not to be outdone, Stevens subtly responded that Scalia "fails to grasp the point." In another section, Stevens labeled his colleague's views as "feeble," not bad for an 88-year-old who himself is anything but.

"When we say this year he didn't play quite as dominant a role, it's really coming down from the heights of Olympus," Lazarus said. "He was still very, very important in so many cases this year, the kind of cases people really follow most closely, writing the opinions in the Guantanamo detainee cases, the child rape case."

When the justices return in October to begin a new term, they will face issues such as profanity on broadcast television and religious displays in public parks. They can also expect greater public scrutiny in the final, crucial weeks of the seeming endless presidential campaign. Both presumptive major party nominees -- Republican Sen. John McCain and Democrat Sen. Barack Obama -- have spoken of the kinds of judges they would like to see on the nation's highest court.

Many court watchers expect that the next president could have three or more appointments, perhaps recasting the ideological balance of the high court to one that could last for decades.

"Given that the court is divided five to four and hangs, in a sense, by a single vote on a lot of hot-button issues," Goldstein said, "you have to look at abortion, affirmative action, religion, to some extent gay rights, the things that people watch in the Supreme Court, that really could be dramatically affected by the election."

It may be too much to expect the public can ignore the perception, at least, that the justices keep a sharp eye on the political landscape when deciding the cases before them.

"If we get retirements coming up and John McCain is president but the Democrats control the Senate, I think you can anticipate some real fireworks with whoever he nominates to the court," Lazarus said. "If Barack Obama is president, he's going to have a friendly Senate, and I think the nature of those confirmation hearings will be quite different.

"Up at the court, it's really hard to say. The interpersonal dynamic is difficult to predict. The one thing we know for certain is that our American legal culture really is divided very deeply, and the court reflects those divisions."