WASHINGTON (CNN) -- Americans have varied feelings about guns. In Focus: Guns in America is a series of stories by CNN photojournalists that looks at the complex views and emotions that surround this controversial subject. 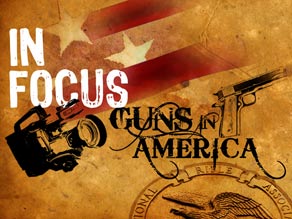 In a 5-4 ruling, the U.S. Supreme Court rejected Washington, D.C.'s, ban on handgun ownership, saying it violates the constitutional right to "keep and bear arms" by preventing individuals from having guns in their homes.

In this series, Americans tell their stories about guns on a first-hand basis, providing a more intimate look at a topic that is often ignored until gun violence erupts.

In one video, 32-year-old Steve Ferguson talks about a shooting in Washington that left him paralyzed, his battle to recover and his views on guns. In another story, Scott Morris shares his passion for his shooting range on a road he named 2nd Amendment Drive.

Start your day with the 'Most News In the Morning'.
6 a.m. ET weekdays

CNN photojournalists also traveled to Massachusetts to play paintball, rural Pennsylvania to hunt turkeys, and to Hollywood to hang out on a movie set.

They also meet Dale Tate, who hand-makes guns that he considers works of art, and they learn about new technology for less lethal weapons.