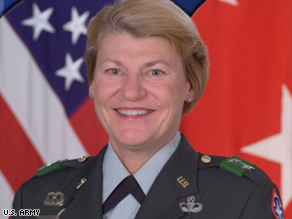 By law women are excluded from combat jobs, the typical path to four-star rank in the military.

"This is an historic occasion for the Department of Defense and I am proud to nominate Lt. Gen. Ann Dunwoody for a fourth star," said Defense Secretary Robert Gates. "Her 33 years of service, highlighted by extraordinary leadership and devotion to duty, make her exceptionally qualified for this senior position."

The Senate must approve the nomination.

"I am very honored but also very humbled today with this announcement," said Dunwoody. "I grew up in a family that didn't know what glass ceilings were. This nomination only reaffirms what I have known to be true about the military throughout my career ... that the doors continue to open for men and women in uniform."

The Army Materiel Command handles all material readiness for the Army. During her career, Dunwoody has been assigned to the 82nd Airborne Division, 10th Mountain Division and the Defense Logistics Agency. She served with the 82nd Airborne in Saudi Arabia during the 1991 Persian Gulf War.

The first woman to become a general officer in the U.S. armed services was Brig. Gen. Anna Mae Hays, chief of the Army Nurse Corps, who achieved the rank in 1970 and retired the following year.

Elizabeth Hoisington, the director of the Women's Army Corps, was promoted to brigadier general immediately after Hays. She also retired the following year.

Currently, there are 57 active-duty women serving as generals or admirals, five of whom are lieutenant generals or vice admirals, the Navy's three-star rank, according to the Pentagon.