WASHINGTON (CNN) -- Americans drove 1.4 billion fewer highway miles in April than they did in April 2007, the Department of Transportation said Wednesday. 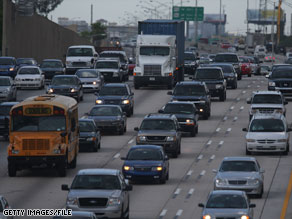 April's drop is more than three times larger than the drop from March 2007 to March of this year, which was 400 million fewer highway miles.

"History shows that we're going to continue to see congested roads while gas tax revenues decline even further," she said.