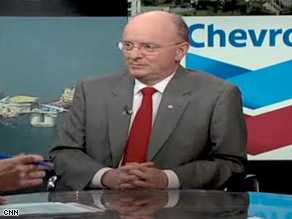 In an interview Tuesday with Wolf Blitzer on CNN's "The Situation Room," O'Reilly said high demand and a short supply of crude oil were key factors causing gas prices to spike. Despite reports of record profits among major oil companies, O'Reilly downplayed a recent poll in which Americans said corporate avarice played a role.

The following is an edited version of the show's transcript:

Blitzer: You know you have -- you and ExxonMobil, the Big Oil companies --have a huge public relations problem. In all the recent polls, when the American public is asked, who do you blame for these huge gas prices at the pump, they -- more than any other single source -- they blame Big Oil. They blame you. What's going on?

O'Reilly: Well, I don't think they blame us as much as you think. It looks to me like there's a lot of blame to go around.

Blitzer: There's other blame, but more than any other single source, they blame Big Oil.

O'Reilly: It depends on the poll you look at.

O'Reilly: Let me point out what we're trying to do about this because I think the issue here is one of supply. And prices are high today, but it's fundamentally a concern about oil supplies -- 75 percent of the price of gasoline is related to crude oil.

We're very dependent on crude oil imports. The total world demand for crude oil has been growing steadily over the last decade. And that is affecting everybody's price. So it is a concern, but we need to work on the supply side, as well as the demand side, to bring change.

Blitzer: Because you have had record profits, right?

Blitzer: But billions and billions of dollars in profits, more than ever before.

O'Reilly: Yes, but it's a big business. And on a return-on-sales business, we're right in there with the average of American business today. What we're doing is investing that money. For example, last year, we did make a lot of money, $18.7 billion. This year, our capital investment in new supplies is $22.9 billion, almost $23 billion.

Blitzer: You know that Barack Obama says if he's president, he wants a windfall profits tax. He wants to take a chunk of your profits right now and give it back to the American people. John McCain opposes that, as you know. So I assume you would like to see John McCain elected president?

O'Reilly: Well, I would like to see no windfall profit tax. And I will tell you why. First of all, we are already heavily taxed as an industry. Our tax rates last year were at 45 percent, compared with in the 30s for the average of all industry.

Secondly, as I mentioned earlier, we're investing the money. If you take the money away, it will reduce investment, reduce supply and have exactly the opposite effect of helping the problem that you have referred to.

And, thirdly, we have done it before. We have had windfall profit taxes. Congress has studied them about 30 years ago. And what happened under those circumstances is supplies dropped domestically, and we became even more dependent on imported oil. You don't want to do that today.

Blitzer: Here's how Sen. Obama put it. Listen to this.

Obama (in a video clip): Sen. McCain wants to give billions of dollars in tax breaks to Big Oil and opposes a windfall profits tax on oil companies like Exxon to help families struggling with high energy costs. I think that is exactly why we need to change Washington.

Blitzer: So, I guess, given the stark difference when it comes to Big Oil between Obama and McCain -- let me rephrase the question -- do you want McCain to be elected?

O'Reilly: I want someone to be elected who will help resolve our energy crisis. And I don't know enough about Sen. Obama's position or Sen. McCain's position to pass judgment on either one of them.

Blitzer: Do you want offshore drilling to be approved on both coasts and in the Gulf, which Sen. McCain now says is a good idea?

O'Reilly: I do think that's a good idea. Today, our shores, except for the gulf off Texas and Mississippi and so forth, are off-limits today. So, look, Europeans who are very environmentally conscious -- the British, the Norwegians, the Danes, the Dutch -- they can allow sensible offshore production from their oceans. Why can't we?

See where drilling is allowed, banned »

Since we have -- over the last 20 years, domestic production has steadily declined -- and we have been more and more dependent on imports. We definitely need to do something about it. We don't know yet how much oil is under there, but we should at least be given the opportunity to look.

Blitzer: We invited our viewers to ask you a question, and some of the I-Reports came in. iReport.com: See what iReporters are saying about gas prices

Blitzer: What do you think?

O'Reilly: Very good question. I mean, $4 gasoline is a reality today because ...

Blitzer: In some parts of the country, it's approaching $5.

O'Reilly: Well, 75 percent of that is the price of crude oil. And that is the crude oil that we have been talking about here that's driving the current crude oil -- energy market.

Blitzer: So, how high is it going to go?

O'Reilly: Well, if crude oil prices come down, I think those prices could moderate. But it's a big if. Crude oil prices have to come down. We need to send a very strong signal to the market that we're serious about increasing supplies in this country.

O'Reilly: I don't know enough about the financial markets. We're a physical player. But I think most of the price that we see today is because of concern about physical long-term supply.

Blitzer: Just because of the huge demand in India and China, also?

O'Reilly: Huge demand around the globe, including here in the United States.

O'Reilly: You know, peak oil is a big question today, and it's a very good question.

One of the issues that we face has been addressed -- around people -- has been addressed to the National Petroleum Council study, which was issued last year by the secretary of energy. It is a very important study. What it really says is, there's enough oil and gas in the ground, but the access is what's impeding production.

So, we could have a squeeze in the years ahead if we don't get after increasing our supplies, not only here in the U.S., but creating a global environment which permits access around the globe and free trade around the globe as far as oil is concerned.

All About Oil Production and Refining • Oil Prices • Chevron Corporation