WASHINGTON (CNN) -- The director of Federal Emergency Management Agency on Sunday defended giving away an estimated $85 million in hurricane relief supplies, blaming Louisiana officials for turning down the stockpiles. 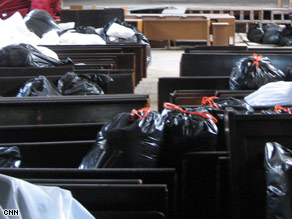 A New Orleans charity keeps goods in trash bags in an empty church. FEMA never told it about the free items.

"We still have quite a few left if Louisiana needs those," David Paulison said. "But we did find out, we did ask Louisiana, 'Do you want these?' They said, 'No, we don't need them.' So we offered them to the other states."

A CNN investigation revealed last week that FEMA gave away 121 truckloads of material the agency amassed after 2005's Hurricane Katrina. The material was declared surplus property and offered to federal and state agencies -- including Louisiana, where groups working to resettle hurricane victims say the supplies are still needed.

After CNN reported on the giveaway, Louisiana officials asked that the supplies be redirected to the state, which originally passed on them. John Medica, director of the Louisiana's Federal Property Assistance Agency, told CNN he was unaware Katrina victims still needed the items because no agency had contacted his office.

Sen. Mary Landrieu of Louisiana, an outspoken critic of FEMA's response to the hurricane, told CNN the supply giveaway was "just a shame."

"It's just another example of the failings of the federal bureaucracy," said Landrieu, who wrote Homeland Security Secretary Michael Chertoff last week to request an explanation. "We're still trying to fix it. It's going to take a lot more work."

Paulison said much of the stockpile included "things we don't normally store -- refrigerators, stoves, coolers, diapers, things like that." States, meanwhile, were requesting those items, he said.

"It didn't make any sense for FEMA to sit on this much stuff and supplies we normally don't even keep. We have plenty of supplies in place if we have another disaster. We can duplicate that type of commodities and get them for people in need," he said.

The agency's chief spokesman, James McIntyre, had declined a request for an on-camera interview and told CNN the giveaway was "not news."

Paulison said the story "just really missed the mark" -- that the supplies given away were not exclusively for Katrina victims, but were "donated from disasters all around the entire country."

But e-mails from McIntyre and from the General Services Administration, which manages federal property, contradict Paulison's account.

In an e-mail sent in April, McIntyre told CNN "in many cases, items were purchased in the field by FEMA."

And in a phone interview with CNN, McIntyre said, "That is property that was purchased in response to Katrina. We purchased most of that equipment because of the catastrophic nature of that disaster."

General Services Administration spokeswoman Viki Reath wrote the supplies given away were "surplus from the Katrina and [hurricane] Rita disasters... some purchased by FEMA, some donated by foreign countries and federal government agencies."

McIntyre said FEMA's storage costs were running more than $1 million a year, and that GSA officials wanted to tear down the Fort Worth, Texas, warehouses in which the stockpiles were being kept.