(CNN) -- NBC News host Tim Russert died Friday at 58. The respected political journalist had been the host of "Meet the Press" since 1991. 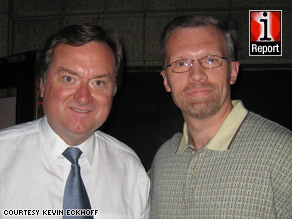 Russert's unexpected death affected many CNN.com readers, who shared their condolences and memories of the veteran newsman.

Cynthia Dwyer said she and her husband have watched "Meet the Press" every Sunday for more than 30 years. "Sunday mornings will never, ever be the same," she said.

"He always made sure he had all his facts straight," Bernstein said. "He left no stone unturned." Watch Bernstein's report on Russert's death

Read more comments on Russert's death from iReport.com users below, some of which have been edited for length and clarity.

SpeechTeach: Politics used to intimidate the daylights out of me. It was one subject that seemed significantly larger than what my brain could handle.

In 2000, I began watching Russert. I haven't been the same person since. His explanations, poignant and direct questioning and humor was riddled with love, understanding, respect and care for the American people. My thoughts on politics have gone from closed to open-minded as a result of watching and listening to him. Simply put, Mr. Russert made me a smarter and wiser person.

missannamae: My family and I loved Tim Russert. I never missed his shows, both "Meet the Press" and "Tim Russert" on MSNBC. In the debates and other political forums, his words were always the words of wisdom. God bless his family and we really share your loss. He will be sadly missed.

punky77: I am in a state of shock and disbelief. I have such a passion for politics and I think he is part of the reason. I knew that when I watched him every Sunday or saw him on the "Today Show" or "Nightly News," he would not only have such keen insight, but you could feel his passion and love for politics and this country just jump through the screen.

I know who my candidate is, but this election will not be anywhere close to what it should be without him. He is such an integral part of American politics and he deserved to be a part of such a historic year for this country.

LilLisa: My husband and I agree that Tim Russert was one of the best journalists of our time and we always looked forward to watching him on Meet the Press and particularly during the debates and analysis during this election year. We, like many others in the general public, will miss his reporting deeply.

RickM: I've been a follower of Tim Russert's insightful commentary on America's political arena ever since he first began on "Meet the Press" back in 1991.

As anyone who follows the many twists and turns of partisan political actions, inactions, debates, comments and escapades that inform or misinform those of us in the peanut gallery, it can be a daunting task to sort it all out. That's what Tim did. He sorted it out for us and more. He gave us the truth.

robertgross: Tim was one of the few great journalists left in an era of shock journalists who spin the news for their own agenda and ratings. I never got the impression that Tim cared about ratings or party differences. The only thing Tim cared about were the issues and getting to the bottom of a story so the American people could understand what was going on with their country and our elected officials.

GoGoGadget: I enjoyed your commentary and the fairness you brought to commentary and reporting. I always valued your way of complementing satire with grit; humbling those who had the pleasure to converse with you. I will miss you...

heighd: I did not know Tim Russert. In fact, I never met him. I am just a huge fan, who watched his show religiously every Sunday. He had a way of talking politics that everyone could understand. As a TV viewer, I knew I could trust him. I knew he was one of the good guys. All through the primaries I would watch all the news channels and read all the articles, but I always came back to Tim Russert.

He was truly the best of the best.