(CNN) -- The U.S. Marine Corps has disciplined two Marines over a videotape that showed a Marine throwing a puppy over a cliff, the military said Wednesday. 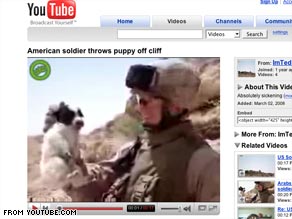 Officials did not specify the role that each man played in the incident, which received international attention after a video of it appeared on YouTube.com March 3.

Lance Cpl. David Motari is being processed for removal for his role, the Marine Corps said, and Sgt. Crismarvin Banez Encarnacion also has been punished.

The video shows someone throwing a black-and-white puppy off a rocky cliff. The dog makes a yelping sound as it flies through the air.

"That's mean. That was mean," someone off-camera is heard saying.

YouTube removed the video about a day after it was posted, "due to terms of use violation," the site said.

The Marines were quick to condemn the video when it surfaced, calling it "shocking and deplorable."

Marine officials said the disciplinary action followed a thorough investigation, according to a statement that the Marine Corps Base Hawaii released Wednesday.

"The actions seen in the Internet video are contrary to the high standards we expect of every Marine and will not be tolerated," the statement said.