FEMA gives away $85 million of supplies for Katrina victims 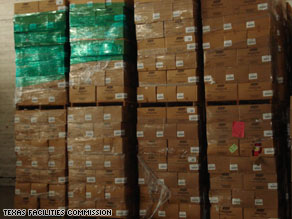 These items, stored by FEMA, were meant for Katrina victims but were given to state and federal agencies.

The material, from basic kitchen goods to sleeping necessities, sat in warehouses for two years before the Federal Emergency Management Agency's giveaway to federal and state agencies this year.

James McIntyre, FEMA's acting press secretary, said that FEMA was spending more than $1 million a year to store the material and that another agency wanted the warehouses torn down, so "we needed to vacate them."

"Upon review of our assets and our need to continue to store them, we determined that they were excess to FEMA's needs; therefore, they are being excessed from FEMA's inventory," McIntyre wrote in an e-mail.

He declined a request for an on-camera interview, telling CNN the giveaway was "not news."

Photos from one of the facilities in Fort Worth, Texas, show pallet after pallet of cots, cleansers, first-aid kits, coffee makers, camp stoves and other items stacked to the ceiling.

Watch dismay over "out of touch" FEMA »

FEMA said some of the items were donations from companies after Katrina, but most were purchased in the field as "starter kits" for people living in trailers provided by the agency. And even though the stocks were offered to state agencies after FEMA decided to get rid of them, one of the states that passed was Louisiana.

Martha Kegel, the head of a New Orleans nonprofit agency that helps find homes for those still displaced by the storm, said she was shocked to learn about the existence of the goods and the government giveaway.

"These are exactly the items that we are desperately seeking donations of right now: basic kitchen household supplies," said Kegel, executive director of Unity of Greater New Orleans. "These are the very things that we are seeking right now. FEMA, in fact, refers homeless clients to us to house them. How can we house them if we don't have basic supplies?"

Kegel's group works with FEMA and other local organizations to rehouse victims of Katrina, the 2005 hurricane that flooded New Orleans and killed more than 1,800 people along the Gulf Coast. Community groups say thousands of people are still living in abandoned buildings in the city, though fewer than 100 people remain housed in tents.

Kegel said FEMA was told in regular meetings that Unity was desperate for household supplies and that the group has been forced to beg for donations. But she said FEMA never told Unity and other community groups that it had tens of millions of dollars worth of brand-new items meant for storm victims.

She said she learned of it from CNN, which found that those items never made it to people such as Debra Reed.

"An honest person like me didn't get nothing," said Reed, 54, who recently moved from a tent beneath a New Orleans bridge to a home with the help of Kegel's group. "I'm gonna turn, 'cause I'm gonna cry. I didn't get nothing. I fought to get my money, but they wouldn't give it to me. So I ended up going under the bridge."

FEMA confirmed that it had kept the merchandise in storage for the past two years and then gave it away to cities, schools, fire departments and nonprofit agencies such as food banks. In all, General Services Administration records show, FEMA gave away 121 truckloads of material.

McIntyre said that most of the items given away were not "standard-issue type supplies" that FEMA would have distributed after other disasters. He said that using the GSA, which manages federal property, to get rid of those stockpiles was "standard process."

Asked whether FEMA believed that Katrina victims no longer needed the items, McIntyre wrote: "If the state did not request the supplies, then FEMA would not know."

Pallets at the Fort Worth warehouse were piled high with boxes of buckets, boots, cleansers, mops and brooms. There were stacks of tents, lanterns and camp stoves for people still displaced, as well as clothing, bedding, plates and utensils.

Meanwhile, Kegel said, Unity's clients can take only "one fork, one spoon, one knife; they can only take one plate. We don't have enough to go around."

But FEMA said the items were no longer needed in the stricken region. So it declared them "federal surplus" and gave them away.

Federal agencies such as the Bureau of Prisons, Postal Service and Border Patrol got first dibs on the material when FEMA started giving it away. Other agencies that received items include the National Guard, U.S. Marshals Service, the Air Force and Navy and the departments of Agriculture, Veterans Affairs and Homeland Security, according to a list the GSA provided to CNN.

These items also were offered to all states -- yet Louisiana, where most of the people displaced by the storm live, passed on taking any of them.

John Medica, director of the Louisiana Federal Property Assistance Agency in Baton Rouge, said he was unaware that Katrina victims still had a need for the household supplies.

"We didn't have anybody out there who told us they wanted it," Medica said.

Instead, 16 other states took the free items.

"Louisiana Recovery Authority Director Paul Rainwater is taking the lead on determing where this serious breakdown in communication occured and ... is working to pursue options for the state to still make use of these important supplies," said Michael DiResto of the Division of Administration.

DiResto said Rainwater has already taken up the issue with a FEMA official.

Kegel said she could not understand how Medica could not be aware of the need in the New Orleans area.

She said she had not heard of the agency and was not registered with them, but after CNN's interview, the agency contacted her about registering Unity of Greater New Orleans so it could qualify for available supplies in the future.