Commentary: Truth nowhere to be found in McClellan book

By Reed Dickens
Special to CNN 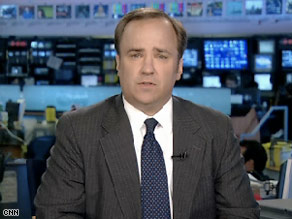 (CNN) -- I worked with Scott McClellan in the West Wing for almost three years. Like most people, I liked Scott very much. But there is zero resemblance between the Scott I worked with and the person I have been watching this past week.

When I first heard about his book, "What Happened: Inside the Bush White House and Washington's Culture of Deception," and read some of its excerpts, I tried to give Scott the benefit of the doubt and wait to read the book for myself.

I mean, Scott McClellan is not some guy who met the president a few times and then decided to write a book, like another staffer did early on. This is a guy who had a great affection for the president, and that affection was mutual.

As I read the book, I kept thinking I would come across evidence to back up the serious allegations Scott was making. I read more. I thought surely there will be some conversation that he claims to have overheard between adviser Karl Rove and President Bush, crafting some story to cover up the truth about Iraq or making the Iraq War sound political in nature. Or, maybe he witnessed some meeting, discovered a memo, or overheard a comment that confirmed his disillusionment.

Still nothing. And then, I realized this book had no facts to support its ill-timed story.

This book is false in premise, disappointing in substance and inappropriate in timing.

First, the premise of the book is flawed for one major reason: This president placed some big bets on the table. For one, an attempt to reform the nation's tragically flawed educational system, which has seen more and more money thrown into it to reward incompetence. For another, to go on the offense in a War on Terror after our nation had been in a dangerously naïve position for years.

President Bush swung for the fence. The president's efforts on these great issues of our time were not meant to be overnight solutions, but genuine efforts to change a faulty system or make us safer in the long term.

You cannot mistake short-term media coverage for history. We will not know for many years how some of these big bets will pay off. So, to presume failure, when there is in fact real progress -- economically, politically, and militarily in Iraq -- is arrogant, short-sighted, and most tragically, undermines the efforts of those making the sacrifice to make America safer for years to come.

The timing of this book is very disappointing.

It is an outright attempt to undermine the president that made Scott's career and hurt those who served alongside him for years. Obviously, had Scott actually been disillusioned while he was in the West Wing -- that would have been the time to share it with those standing shoulder-to-shoulder with him. But this takes courage, and that is a lot to ask of a staffer.

The other option would have been to share these newfound feelings years from now, after the dust is settled and the results from a very significant presidency are tallied. To use the platform that he was handed to poison the well from which he drank so freely is hypocritical at best.

Scott was chosen by the president for his loyalty, not his communication prowess. And in a tough final year of one of the most-challenging and consequential presidencies in history, this book is quite a thank-you note.

Over the last week, I have been asked two questions over and over.

First, "What do you think happened to Scott?" And, the second, "How does it make you feel?"

Both are tough questions to answer. But because I was traveling when the story broke, I was able to process both before being inundated with the opinions of so many others.

As for what happened to the Scott we knew, I believe his is a classic case of what bitterness and an inability to forgive can do to you. While Scott had some valid disagreements with some of the other staff about the situation he was put in during the Valerie Plame case -- simmering for two years about it seemed to change him.

And as for how I feel, well, it makes me sad that he forced the rest of us to choose between a friend that we respected and a president we love.

I believe Scott's judgment was clouded and his memory distorted during his effort to revise his personal history and -- as he states in the opening pages of the book -- find "his own version of the truth."

I happen to believe there is just one version of the truth, and it is nowhere to be found in this book.

All About Scott McClellan • The White House • George W. Bush